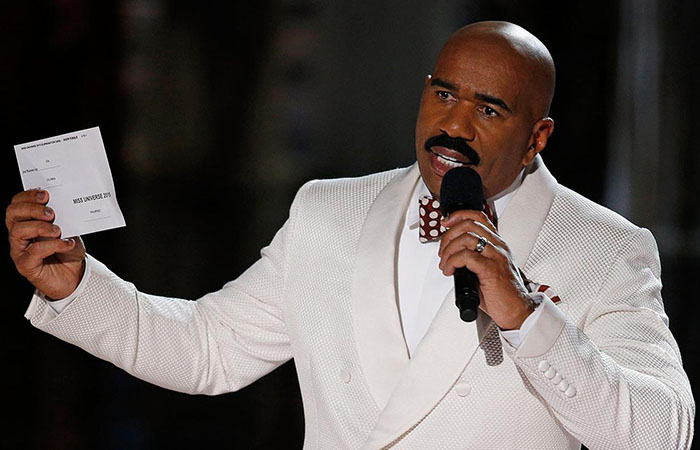 Beloved comedian/actor/author/philanthropist Steve Harvey became the laughing stock of the world last night after he mistakenly crowned the wrong woman as Miss Universe.

In what is being dubbed one of the worst moments in live television history, Harvey accidentally announced Miss Colombia (Ariadna Gutierrez-Arévalo) as winner of the 2015 Miss Universe Pageant instead of the actual winner Miss Philippines (Pia Alonzo Wurzbach).

When it came time to announce the three finalists in the pageant, Steve correctly announced the second runner-up Miss USA (Olivia Jordan), but he read the card incorrectly for the first runner-up, which led to the horrible gaffe that was relentless mocked on social media.

Here is a photo of the card:

After Arevalo received the crown and a bouquet of flowers, Harvey announced he had made an error and that Wurzbach was in fact the winner.

A stunned Wurzbach, who had taken her place with the other contestants behind Arevalo, then walked out to center stage. Last year’s Miss Universe, Colombia’s Paulina Vega, then removed the crown from Avrevalo’s head and placed it on Wurtzbach.

With both pageant contestants standing at the front of the stage, the show concluded.

Harvey, who was hosting the contest for the first time, held up the card announcing the order of finishers for Fox network cameras to see up close afterward.

He said he re-read the card and noticed it said “first runner-up” next to the Colombia contestant’s name before he asked producers if he had made a mistake.

Talking with reporters afterward, Harvey and an executive for pageant owner WME-IMG called it human error. “Nobody feels worse about this than me,” Harvey said.

In yet another #FAIL moment of the night, Steve apologized “emphatically to Miss Philippians and Miss Columbia.”

“This was a terribly honest human mistake and I am so regretful,” he wrote.

.@IAmSteveHarvey got so upset he brought the Bible into it… Miss Philippians #MissUniverse2015 pic.twitter.com/XRwVKpJ6pM

Once Steve realized Philippians was one of the Books of the Bible and Columbia is the capital of South Carolina, he quickly deleted the tweet, but of course it was screenshotted and passed around on social media, because the Internet is relentless in its collective pursuit of having no chill whatsoever. He added, “I don’t want to take away from this amazing night and pageant. As well as the wonderful contestants. They were all amazing.”

I'd like to apologize wholeheartedly to Miss Colombia & Miss Philippines for my huge mistake. I feel terrible.

Secondly, I'd like to apologize to the viewers at that I disappointed as well. Again it was an honest mistake.

I don't want to take away from this amazing night and pageant. As well as the wonderful contestants. They were all amazing.

Here are videos showing how everything went down:

The Colombian Cartel has a new target… #MissUniverse2015 pic.twitter.com/a9NC4jv1uP

The moment you named the wrong #MissUniverse2015 pic.twitter.com/PkkV7K9Uiu

Colombia better than me, I woulda ran off the stage like them hoes on Maury. pic.twitter.com/2baOVw4lPa

After Hamburger Helper deleted their HILARIOUS tweet, they posted this equally hilarious apology:

Ok folks…uh..there's…I have to apologize…

Justin Bieber even joined in on the fun:

All jokes aside, we are all humans who make mistakes. You’d be hard-pressed to find anyone whose never made a mistake in life.

Fortunately for most of us, however, our mistakes aren’t broadcast to millions of people all over the world.