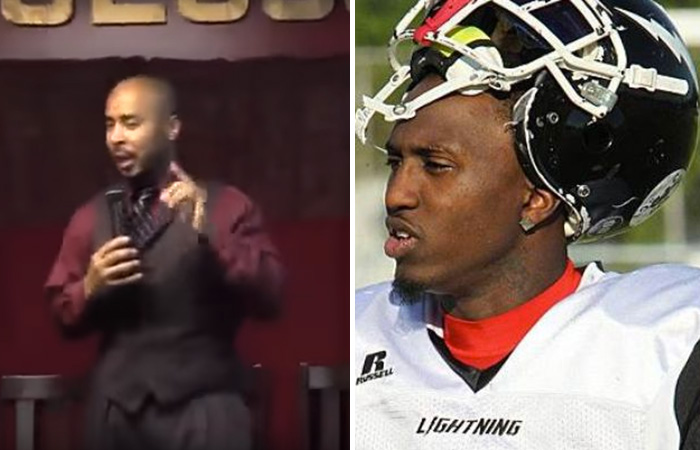 A Detroit pastor could face serious charges for killing a member in his congregation.

According to Fox 2 Detroit, 25-year-old Deante Smith went to the The City of God church on Grand Avenue Sunday (Oct 18) to confront his pastor, 36-year-old Keon Allison over an alleged affair between the preacher and Deante’s wife.

During the heated argument, Smith attacked Pastor Allison with a brick. In what appears to self defense, Pastor Allison shot Smith four times with a semiautomatic pistol. He was taken to a local hospital where he was pronounced dead.

The whole thing went down in front of a church congregation just 15 minutes after a 1:30 p.m. service had started. Officials confirmed that the pastor and Smith knew each other personally and had “some type of problem before.”

Pastor Allison was taken into police custody for questioning and was released later that night.

Friends close to Smith say the incident that took place doesn’t represent the true character of Smith, who was a standout on the Michigan Lightning semi-pro football team and all-round good person.

“That’s not like my friend, not like the Deante I [saw]. He never acted like that around me. He was always a good person, smiling, asking me to come back to church,” Smith’s friend Jamie Warfield said. Smith’s cousin Detrese Abbot said their family is devastated over the situation.

“It’s unbelievable,” Abbot told the Detroit Free Press. “They’re painting him to be a monster, but he wasn’t. They knew each other very well. This is not just a strange man that walked in looking to harm someone. … We’re just trying to figure this whole thing out.”

Abbot said Smith was a member of the church for the past four years and the pastor was a “mentor” and “father figure” to him.

“The pastor took him under his wing,” she said. “He was someone my cousin looked up to as a father figure. … So much happened that led up to this. I just don’t understand none of this. …They had a relationship and bond that couldn’t be broken. For this to end like this and for them to paint him as a crazy and deranged person, he didn’t want this to come to this.”

Smith reportedly vented about his personal life on Facebook a month prior to the shooting. He wrote on September 15th that he was “Divorced and Happy.”

However, Abbot said her cousin and his wife weren’t actually divorced, and they were trying to work on their marriage and were in the midst of reconciling before he was killed.

Abbot said Smith began to change after he started suspecting that his wife was having an affair with Pastor Allison.

After Smith’s Sept. 15th Facebook post, he shared another one the next day saying that he would be at the church Sunday armed “WITH THE TRUTH.”

“He had been saying it for a couple days now, that the truth is going to come out,” Abbott said.

Smith also had accused the pastor of the being the father of his wife’s baby. “It’s crazy because everyone was living a normal life, like they didn’t know what was going on between his wife and pastor,” Abbot said. “It really hurt him.”

A spokesperson for the Detroit Police says their investigators are still working hard on this case to figure out what happened.

Once their investigation is complete, a report will be sent to the prosecutor’s office to determine whether charges will be filed, and if this shooting was justified or not.