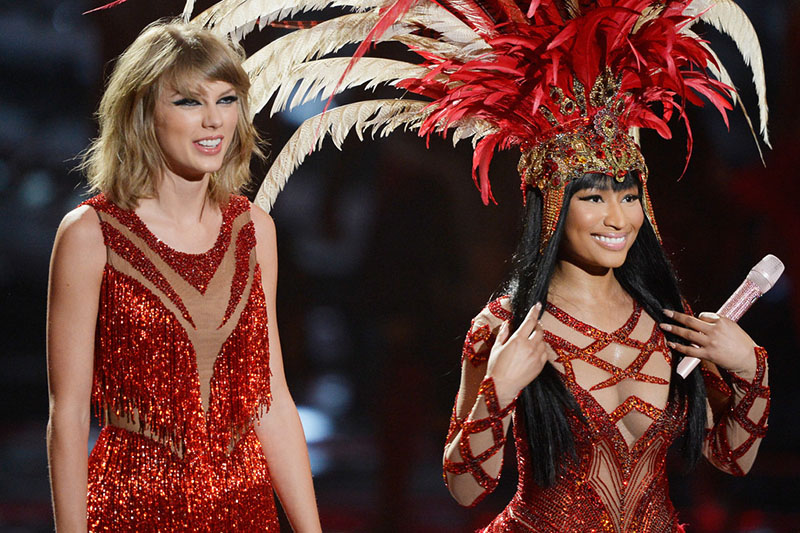 Nicki Minaj and Taylor Swift already squashed their short-lived Twitter beef weeks ago, but the pair proved that there’s absolutely no bad blood between them what-so-ever as they opened the 2015 MTV Video Music Awards together tonight.

Rocking a red feathered costume, Nicki kicked off the performance with her carnival anthem “Trini Dem Girls” before being joined by Taylor for her second number “The Night Is Still Young.”

The two then sang a snippet of “Bad Blood” together and put an official end to their Twitter spat by hugging it out on stage at the end.

We’ll let Hollywood Life explain the significance of this performance:

The performance has major significance, because when the VMA nominations came out, Nicki went OFF on Twitter…and Taylor thought she was shading her! When Nicki wasn’t nominated for Video of the Year, she tweeted, “If your video celebrates women with very slim bodies, you will be nominated for vid of the year.”

Considering Taylor’s “Bad Blood” featured a ton of skinny models, the 25-year-old thought the comment was directed right at her, and wrote back, “I’ve done nothing but love and support you. It’s unlike you to pit women against each other. Maybe one of the men took your slot..”

The pair went back and forth about the issue, and Tay eventually apologized, and the ladies had an important phone call, eventually becoming friends once again. Well, clearly the “Bad Blood” is over between these two now!