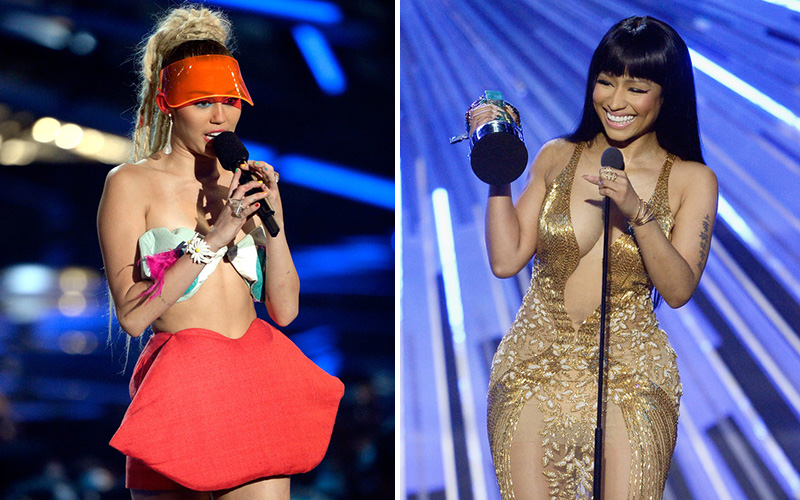 In probably one of the biggest WTF moments in VMA history, Nicki Minaj confronted Miley Cyrus over comments she recently made about her in an interview LIVE ON STAGE.

After accepting the “Best Hip Hop Video” award for “Anaconda” tonight, Nicki went from thanking her pastor (shout out to Pastor Lydia!) to calling Miley a “bitch” for bad mouthing her to the press.

“And now, back to… this bitch that had a lot to say about me the other day in the press. Miley, what’s good?!?”

Miley who appeared to be a combination of confused and annoyed (but we all know she didn’t want to catch that fade though) responded:

“We’re all in this industry. We all do interviews and we all know how they manipulate. Nicki, congratulations.”

It isn’t clear whether Nicki was truly heated or if she was just joking, but she did tweet this immediately afterward:

The whole ordeal apparently stems from Miley’s comments in the New York Times on Nicki’s character and her Twitter war with Taylor Swift.

“If you want to make it about race, there’s a way you could do that. But don’t make it just about yourself. Say: ‘This is the reason why I think it’s important to be nominated. There’s girls everywhere with this body type.’ You made it about you. Not to sound like a bitch, but that’s like, ‘Eh, I didn’t get my VMA.'”

“What I read sounded very Nicki Minaj, which, if you know Nicki Minaj is not too kind. It’s not very polite. I think there’s a way you speak to people with openness and love. You don’t have to start this pop star against pop star war. It became Nicki Minaj and Taylor in a fight, so now the story isn’t even on what you wanted it to be about.

“If you want to make it about race, there’s a way you could do that. But don’t make it just about yourself,” the 22-year-old singer said. “Say: ‘This is the reason why I think it’s important to be nominated. There’s girls everywhere with this body type.”

Back in July, Nicki went on a twitter rant accusing the VMAs of snubbing “Anaconda” for a video of the year nomination.

Minaj also accused the VMAs of only nominating women with slim bodies, which made Taylor Swift feel as if Nicki’s rant was aimed towards her.

Taylor took to Twitter to tell Nicki she was disappointed by her comments and never did anything other than love and support her.

Nicki later clarified her statements had nothing to do Swift or any other women, but rather, a system that doesn’t credit black women.

Taylor apologized for taking Nicki’s comments the wrong way and two even opened up tonight’s VMAs together to show how much they still have love for each other.