GOSSIPONTHIS.COM Weird News Spoiled Brat Set $250K Ferrari on Fire Because He Didn’t Like It... 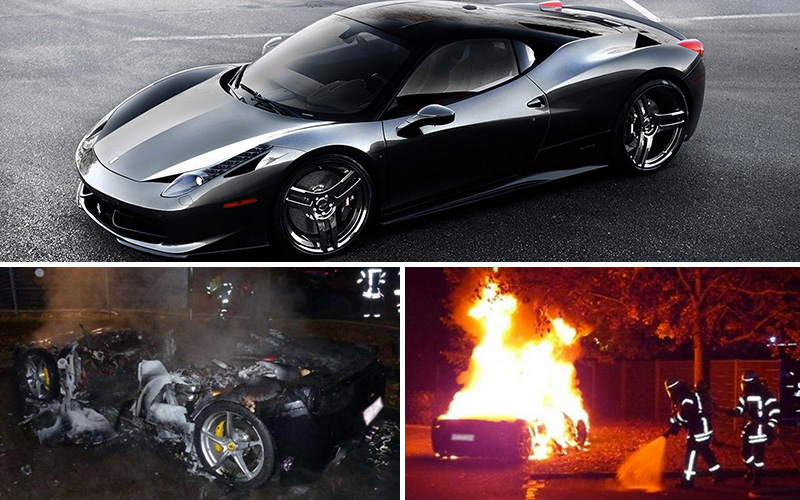 A spoiled brat with an extreme sense of entitlement (and a complete lack of common sense) thought it would be a good idea to set fire to a Ferrari he owned that was worth close to $250,000 just so he could get a newer car from his rich father.

The torched car was reportedly one of 15, including a Lamborghini, all of which were purchased for him by his wealthy father. According to the New York Daily News (via the Swiss newspaper 20 Minutes), in addition to his luxury fleet of cars, the son had also been given a $30 million property portfolio from his father, AND he gets up to $10,000 a month in allowance.

But obviously none of that was enough, because after getting his Ferrari 458 Italia appraised, he decided he wanted a newer, more expensive vehicle, because sure, why not?

The 20-year-old said a car salesman told him to commit insurance fraud, so naturally, he did it, and came up with a “plan” with friends to set the Ferrari on fire to collect the insurance money.

He paid three accomplices around $15,000, and while he was at a massage parlor, they set the car on fire. In an attempt to cover their tracks, they made sure it was done over the border in southern Germany. But his cunning plan was foiled after security cameras quickly pinpointed who had carried out the car arson.

The 20-year-old told the court his funds had run dry by the time of the incident and was not brave enough to tell his father he did not like the Ferrari.

His dad should take the rest of his cars, sell them (or keep them for himself) and cut this fool off.

He obviously doesn’t deserve to see money, let alone have access to it — especially in the sum of a $30 MILLION REAL ESTATE PORTFOLIO PLUS $10K/MONTH ALLOWANCE.

Why do we live in a world in which people like this exist?