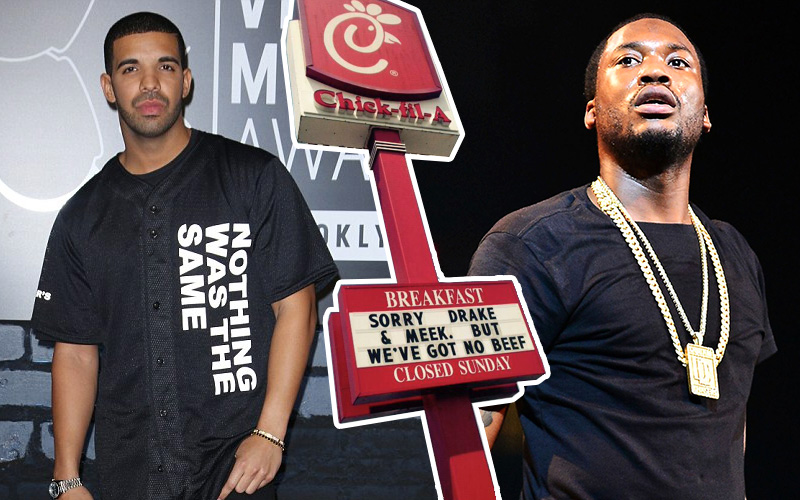 In case you didn’t already know, Drake and Meek Mill are beefing.

It all started when Meek got mad at Drizzy for not promoting his new album Dreams Worth More Than Money on Twitter, an album that Drake is featured on. (BTW, Drake did, however, promote Future’s album Dirty Sprite 2, which he is also featured on.)

http://t.co/qZyz2ybsnh @1future Dirty Sprite 2 and I am on there!!! FBGOVO

Meek responded to the apparent slight by tweeting that Drake uses ghostwriters, even going so far as naming the alleged ghostwriter Quentin Miller.

Drake fired back by releasing two diss tracks (“Charged Up” and “Back to Back“), which were well received by the public.

Meek, however, was railed on for his tardy for the party ass diss track “Wanna Know,” which took him nine days (NINE DAYS) to release. In it, he reveals that one time Drake got peed on in a movie theater.

Social media erupted with memes and funny jokes on Twitter, which wasn’t surprising at all because that happens all the time.

What was surprising though was when the big brands and food chains like Chick Fil-A, Burger King, White Castle, Whataburger, Rosetta Stone, Cinepelex, etc. chimed in with their hilarious responses.

All these burgers and they still got beef. #BackToBack pic.twitter.com/ZCHfazodwB

What I find when I get to work ….. pic.twitter.com/zRUAmlFqHt

Sorry @MeekMill, looks like you have egg on your face. @Drake wins. #overeasy.

We might not be able to translate the latest #MeekMill soundtrack, but we can help you learn languages most ppl speak http://t.co/rt9VwAAc49

@Drake not in our theatre tho, right?

TIL: They raise Grade-A beef in Toronto.

Damn. It’s bad enough getting roasted by social media, but how many people can say they’ve been dissed by Hamburger Helper?