GOSSIPONTHIS.COM TV “Power” Season 2 Episode 3 Recap: Tommy and Kanan Are Getting Too... 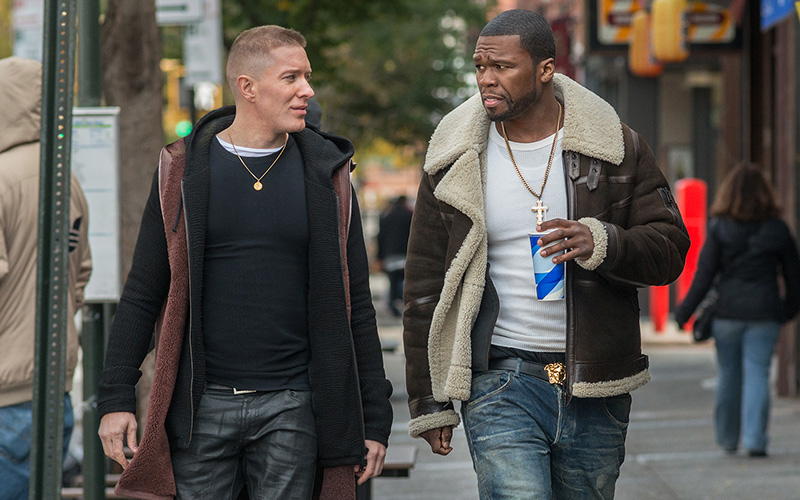 In the third episode of the second season of “Power,” Angela and Ghost pretend to be a real couple in Miami, where Ghost (or James, or “Jamie,” whoever) has to handle business in more ways than one.

Also, Tasha feels some type of way when Shawn and her BFF LaKeisha start getting too close for (her) comfort, so much shit escalates so quickly it’s hard to believe that we’re only three episodes in, and is it just me, or are Tommy and Kanan getting a bit too close, too soon? Ghost and Angela Are Not “Like Any Other Couple” After All

She’s a federal agent. He’s a drug dealer who uses nightclubs and laundromats to (literally) clean his money. On what planet will this ever work? Definitely not this one. Don’t get me wrong, all couples have problems. But damn!

While “Jamie” and Angela are embracing their first vacation (and their official test to see if they can handle that “real couple” life), there’s a lot going on in the background.

Angela spends most of her time trying to figure out the connection between Tommy and “Ghost.” Jamie spends his time doing double duty — acting as Stern’s errand boy, while also trying to track down and kill the woman we know as Pink Boots.

Both of them really want this “real relationship” thing to work, but with all the craziness going on in their lives, they’re lucky they get the moments that they do have. Stern Sends Ghost to Do His Dirty Work, But Does Ghost Have Something Else Up His Sleeve?

Ol’ snake in the grass — aka Simon Stern — has sent James St. Patrick to Miami to do his dirty work for him.

As soon as Angela and Jamie arrive, Jamie’s first line of business is to meet with a nightclub owner who Stern is trying to basically hustle out of his own club by forcing him to give up shares he doesn’t want to give up.

It takes some hard work on Jamie’s part — he even enlists his “lawyer girlfriend” Angela to give him some legal advice — but he eventually gets the job done. But the way their conversation goes while the deal is being made, it sounds as if James isn’t just some “errand boy” for Simon Stern.

Maybe Mr. St. Patrick’s ultimate plan is to team up with all of these disgruntled nightclub owners Stern is no doubt going to create with his shady business dealings and overthrow Stern from his own empire. With Ghost out of town “on business” (it sounds even funnier when you say it out loud), Kanan has taken the wheel of Ghost’s car, giving Shawn a chance to ride in the passenger seat for a chance.

Like the saying goes, “Father Knows Best,” and Kanan can definitely sense that Sean is feeling Tasha, despite Sean’s terrible attempt at denying it.

“A fine woman who know she fine is trouble, and that bitch bad,” Kanan advises his son, basically telling him to shut down that shit down, and shut that shit down quick. It’s not worth it, especially considering the dynamics of their relationship. The woman is married to his boss, after-all.

Later, Sean actually takes his father’s advice, and proves that he’s done falling for Tasha and her teases.

While helping Ghost and Tasha’s son Tariq with his school project — which was put together with Gucci shoe boxes, of course — Sean basically puts Tasha in her place and tells her that she’s “like a big sister to me.” Ouch.

Then, while Tasha and her friend LaKeisha are talking about Ghost cheating on her (LaKeisha knows he still is, Tasha believes him when he says he isn’t, blah blah blah) Shawn walks in all sweaty after playing basketball with Tariq and LaKeisha starts flirting with him.

Of course Tasha doesn’t like this (especially because he isn’t paying her any mind) but she can’t say anything about it because she’ll look super pressed … AND SHE’S MARRIED, FOR CHRIST-STAKE.

With LaKeisha and Shawn flirting up a storm right in front of her face, Tasha gets jealous and drops a glass on purpose to make them stop. Her plan backfires though, because LaKeisha is all “whatever, I need a ride home, Shawn, can you take me?”

While parked in front of LaKeisha’s house, she and Shawn start talking, and in the middle of their conversation, Shawn’s phone starts ringing.

Of course it’s Tasha trying to figure out what’s taking him so long (she just KNOWS they’re somewhere having sex, or something), but LaKeisha hits the ignore button and gives Shawn a passionate kiss.

I think we all know where this is headed to next. Tommy is Trigger-Happy Kanan’s Biggest Fan … But at What Cost?

Remember last episode when Ghost told Tommy to “bring Kanan in slowly?” Well, it looks like that went in one ear and went right out of the other, because Tommy has basically welcomed Kanan back into the crew with open arms.

Tommy takes Kanan — who is eager to get back into the drug game — on a “tour of the streets,” showing his newly sprung friend everything he and Ghost have built up while Kanan was locked away in prison.

He even goes as far as to take Kanan to one of the laundromats they use a front for their drug business. “This is where we clean our money, so we can pay our bills,” Tommy says.

“Clean your money, huh? Sounds like some Ghost shit. Always trying to look like a goddamn citizen,” Kanan scoffs.

Doing that thing where talks too damn much, Tommy blabs to Kanan about how Ghost “stole” most of his ideas from Kanan. Tommy also brags to Kanan about Ghost being in Miami to take care of Pink Boots.

Kanan excuses himself to the bathroom and makes a private phonecall to Dre, telling his young foot solider to head out to Miami and get to Pink Boots first, before she can tell Ghost anything.

Kanan later asks to be Tommy’s wingman while Tommy goes to visit the RSKs to talk business, and shit escalates very quickly after QDub refuses to work with them out of suspicion that they had something to do with the death of his brother Rolla.

Tommy doesn’t like it, but he respects QDub’s decision. Kanan, however, doesn’t like hearing no from people, so he decides murdering the kid is the best way to go about things.

“You know the real reason why they call you quarter-water? Because yo mama use to charge 25 cents to pull a nigga dick after school,” Kanan says to QDub before pulling out his pistol and taking him out with one shot.

This, of course, starts a chain reaction, and Tommy is forced to kill everyone else in the room, including witnesses. Something tells me this isn’t going to end well. Ghost is going to be PISSED when he finds out what went down. And I imagine the RSKs aren’t going to be too happy either.

As for Kanan, this makes the second body he’s caught since his prison release. Trigger-happy, much? Tommy may stan hard for Kanan, but he better watch his back fooling around with this guy. I think we all knew this was going to happen. We didn’t know when, we didn’t know how, but it happened and it was not a surprise.

While Ghost is boo’d up in Miami with Angela, he takes any chance he gets at surveilling Pink Boots — who we find out is just a nice wholesome girl named Mariela, whose father only wants the best for her.

In a touching scene, Mariela talks with her father in what will be their last conversation ever. She tells him she has to “go home to see the family.”

He just wants his daughter to get married and give him some grandbabies. And in that order. “You better come back married and pregnant,” he tells her.

After a botched attempt at trying to take her out at the corner store she runs with her father (which was a bad idea, it’s a good thing she wasn’t there, smh), Ghost spots Mariela while out on a dinner date with Angela. It doesn’t take long for Mariela to see Ghost either, and she immediately takes off after making eye contact.

Ghost gives Angela some lame excuse about needing to go the bathroom (after dropping his knife, LOL), and goes on a foot chase with Mariela. She was fast enough to evade Ghost, but she had no idea that someone else was after her at the same damn time.

Kanan’s henchman Dre comes out of nowhere and stabs Mariela multiple times. Ghost eventually catches up to her, but it’s too late.

He tries to get her to tell him who hired her to carry out those murders (and his botched murder attempt), but she’s real to these streets, and only says it was “not Rolla” just as her soul is vacating her body. R.I.P. Pink Boots. You went out like a em-effin GEE. Because Angela just couldn’t leave well enough alone, she has now put Ghost in the awkward position of having to choose between his best friend and his girlfriend.

While out on a date, Ghost and Angela get to fantasizing about the life they would have if they decided to move to Miami. Ghost seems to have it all figured out too, even down to transferring his kids to one of the best schools in the city — as if Tasha would EVER let that go down.

Their date is interrupted by an unexpected phone call from Greg, who goes all apeshit on Angela for hacking into his FBI account and listening to voice recordings related to the Lobos case that she’s NOT supposed to be working on.

Angela somehow gets Greg to look through surveillance footage around the time Ruiz was holed up after his stabbing to see if Tommy’s blue Mustang shows up, and he calls her back later telling her that it did. Now she has all she needs to try and convince Ghost to rat his best friend out.

Angela really wants to know what Jamie’s relationship is to Tommy, so after one of their many lovemaking sessions, she finally fesses up to Jamie that she is an Assistant United States Attorney, and she is investigating Tommy, and could put him behind bars for a very long time.

Angela tries to convince Ghost to testify against Tommy in order to save not only himself, but “their dream.” She’s literally telling this man to sell his best friend out so they can be together for real.

Of course Jamie plays dumb and pretends he doesn’t know anything about Tommy’s history in the streets, and he also pretends he had no idea Angela was a federal agent. Angela buys into the whole thing, but the real shocker comes when she asks Jamie, “Have you ever heard anyone on the streets call Tommy ‘Ghost?'”

When Angela and Jamie get back to NYC, they go their separate ways. Until, you know, it’s time for Ghost to follow up on that whole “I’m going to testify against Tommy to save ‘our’ dream thing.”