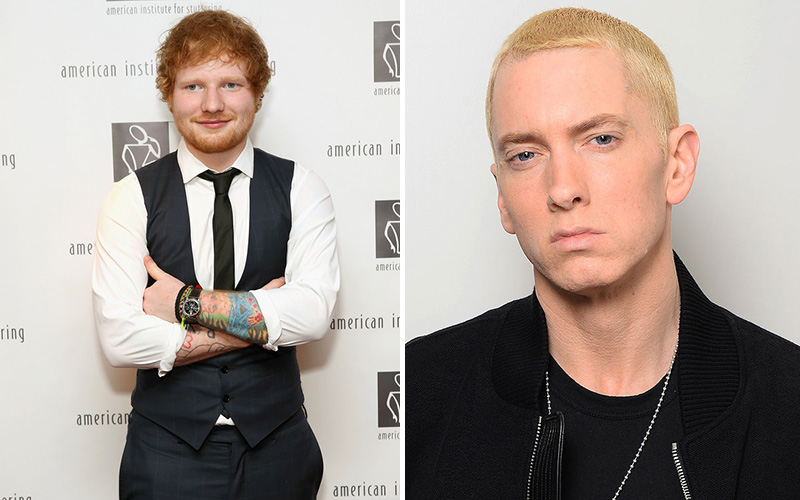 Having a speech impediment, such as a stutter (or stammer) can be a life-altering experience. So much so that parents of children who stutter often turn to speech therapists and other professionals to help them get rid of their speech problems.

Ed Sheeran used to stutter when he was younger, and though speech therapy didn’t work for him, the music from one particular rapper helped him overcome his stutter. That rapper is Eminem.

Earlier this month, Sheeran gave an inspiring and encouraging speech at the American Institute for Stuttering’s Freeing Voices Changing Lives Benefit Gala, where the singer was being honored for his openness regarding his past troubles with stuttering.

Sheeran’s overall message to his fans was to “be yourself” and “embrace your weirdness.”

“Having things that make you different help you become an interesting person,” he told The Hollywood Reporter. “Most of the people I knew that were normal in school are all pretty dull right now — they go to the gym four times a week and look at themselves in the mirror a lot, but they don’t really have a lot to say.… Most of the people that are successful started life off as a weird kid with no friends.”

More via THR (emphasis ours):

In his speech, Sheeran proudly noted his childhood’s rougher edges.

“I was a very, very weird child. I had a port-wine stain birthmark on my face that I got lasered off when I was very young; one day, they forgot to put the anesthetic on, and ever since then, I had a stutter.

“I also had very big, blue NHS glasses — NHS is the National Health Service, one day I hope you’ll have the same! And I lacked an eardrum on one side of my ear, so stuttering was actually the least of my problems!”

“But it was still quite a difficult thing. The thing I found most difficult was knowing what to say but not really being able to express it the right way,” he continued.

“My Uncle Jim told my dad that Eminem was the next Bob Dylan — it’s pretty similar, it’s all just storytelling — so my dad bought me The Marshall Mathers LP when I was nine years old, not knowing what was on it.

“I learned every word of it, back to front, by the time I was ten. He raps very fast and melodically and percussively, and it helped me get rid of the stutter.”

“The people I went to school with that were the most normal and were the coolest when we grew up — I was telling Emily earlier that one of the cool kids from school now does my plumbing! That’s a fact!”

“I wanted to not necessarily to shed light on stuttering or make it a thing, but stress to kids in general to just be yourself, because there’s no one in the world that can be a better you than you,” he continued onstage at the The Lighthouse at Chelsea Piers.

“If you try to be the cool kid in class, you’ll end up very boring and doing plumbing for someone who apparently wasn’t that cool. Be yourself. Embrace your quirks. Being weird is a wonderful thing.… I have a f—ing football team now, that’s pretty cool!”

“Embrace your weirdness,” he concluded. “From a stuttering point of view, don’t treat it as an issue. Work through it and get the treatment you want to get, but don’t ever see it as a plight on your life. Carry on pushing forward.”