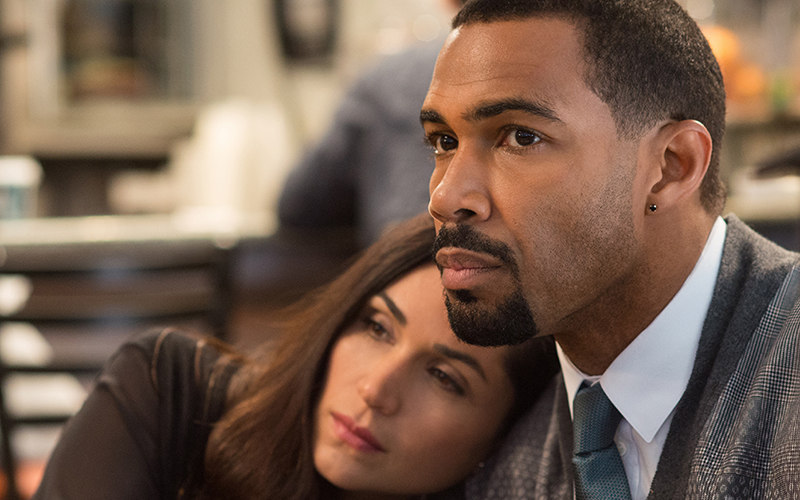 Boy, is this season of “Power” moving pretty fast, or what? With so much going on, it’s almost hard to keep up.

In the second episode of the the second season of “Power,” Ghost and Angela investigate each other, Ghost accepts a deal from Stern, going from boss man to worker bee, and Kanan pops up and surprises Ghost with his “early” release.

Ghost is definitely keeping a close eye on Angela, and while Angela, meanwhile, is working on that Lobos case, she doesn’t even realize that the “Ghost” she’s looking for is the same person she’s screwing every other night.

After Tommy put that bug in Ghost’s ear about Angela being a federal agent, Ghost begins to do a little investigating of his own.

Ghost secretly tails Angela and sees her talking to her ex-boo Greg, who is still working on the Lobos case and is relentless with his refusal to tell her anything about it, because they’re not fucking anymore. And there’s that little thing about keeping his job too. Totally understandable.

Ghost recognizes that Greg is an FBI agent because of his sweatshirt, which reads “Ben’s Steakhouse, Quantico, VA.” (FYI: Quantico, Virginia is home to the FBI Training Academy)

With that knowledge, Ghost starts putting more pieces of the puzzle together. Now he knows for sure Angela works for the feds, and now he needs to find out how much she knows about him.

Angela later gives James a key to her place, unwittingly giving “Jamie” full access to her apartment so that he can really start his investigation on his high school sweetheart.

By now, it’s blatantly obvious that Simon Stern is playing mind games with Ghost … err “James St. Patrick.” Or is it the other way around?

Not only did Stern secretly purchase the building houses Truth, but he also basically forced James into a partnership with him. “It’s the partnership you’ve always wanted,” Stern tells James. “Except, I would technically be in charge.”

Stern and St. Patrick make an agreement on their deal. If James can get the club operating at 20% profit (which should be easy for him, just as long as he gets over the hurdle of being able to move all that weight), he can “buy his freedom,” which is as terrible as it sounds.

“How come I don’t believe you?” St. Patrick asks Stern. “I think it’s a cultural thing,” Stern replies. Hey, at least the guy is straight forward with it, but this also proves that James is just playing along and he knows there’s some bullshit ahead. Keep your friends close, your enemies closer and your “frenemies” even closer.

Stern later rubs salt in James’ open wounds by making Kantos the new General Manager of the nightclub. “Wait, I thought that was MY job?” James likely asked himself when he was told the news, while Kantos awkwardly stood there like “I’m so not with this shit, but whatevs man, I got bills to pay.”

Simon also decides to send James to Miami to do some dirty work for him, and James uses that as an opportunity take Angela on that Miami vacation she’s been wanting, but she tells him she can’t go. Bummer.

In a later scene, Stern pulls the ultimate fuck boy move and tells Kantos that he needs to do whatever needs to be done to make sure that James doesn’t reach 20% profit, basically reneging on their whole deal.

Stern merely wants to “keep James, learn his tricks, and send him on his merry way.” After James is gone, Truth will belong to Kantos, and his past will be “washed away.” (Wait, this guy has a past? What’s his story?)

Kanan Is Back, Bitches

Kanan was all, “I’m back, bitches!” when he popped up at Ghost and Tasha’s house with his son Shawn. Kanan tells them he got out a year early on “good behavior,” but Tasha and Ghost are still giving him the side-eye.

Tommy, on the other hand, is the exact opposite and is welcoming Kanan back with open arms. “This is Kanan! He basically raised us!” he rationalizes to Ghost after Ghost tells Tommy not to be too open with Kanan. “We need to bring him in SLOWLY,” he tells Tommy.

Holly Doesn’t Know How to Keep Her Dayum Mouth Shut

Ghost confronts Tommy about this at the hospital. “She called me Ghost, Tommy. Where’d she get that from, Tommy?” he inquires. “OK, I fucked up, but I can handle my woman, just like you can handle Angie,” Tommy tells Ghost.

He has a point, but at the same time, Ghost has known Angie for more than a decade. “You’ve known this woman for 30 seconds!” Ghost yells to Tommy, referring to Holly. Ghost’s point is better.

Because Holly knows everything about their operation and could go and blab her mouth off about it to anyone at any point, Ghost comes up with the idea of having his wife Tasha get close with her.

“You’ve gotta control her, make her safe, make her feel like she’s on the inside, like she can turn to us if something goes wrong,” Ghost tells his wife, who responds by buying Holly groceries and spending some girl time with her.

Tommy tells Holly the story of what happened and how she got shot: “Some fucking loser crazy chick got in the club, drugged up, took some shots. Wanted someone to pay for her not being on the list or some shit like that.”

Holly later confronts Tommy about the story he told her. She listened to old voicemails he sent her while she was being wheeled into surgery, meaning that he clearly had no idea what was going on or that she had been shot.

Holly gets Tommy to tell her what really happened by threatening to leave. “The cunt was trying to hit Ghost,” he blurts out. “We had problems with people taking shots at us, but it’s all under control now. The that ordered the hit is gone.”

It’s not, and he isn’t, but DAMMIT TOMMY, STOP TELLING THIS GIRL EVERYTHING. YOU DON’T KNOW HER LIKE THAT!

Angela Tries To Connect The Dots Between Tommy and “Ghost”

Angela ends up cracking Greg’s password, which gives her full access to the Lobos case. After using Isabel to help her finish the sketch, she runs it through the FBI database and the results come back with a list of names, one of which is her former classmate “Thomas Egan” aka Tommy. Not good.

She does a background check on “James St. Patrick.” Nothing comes up. The man’s record is clean. Now we know where he gets that “Ghost” nickname from. The man is literally a ghost!

“Jamie,” meanwhile, is back at Angela’s apartment going through all of her case files to see if she has anything on him. He doesn’t find anything, which relieves him (that poor, poor, delusional man) but one of the show’s best moments was when she walked in the front door and he had to quickly put everything back and play it off like he was just in her bedroom chilling. Smooth. Kinda.

Near the end of the episode, Ghost gets a text telling him that the Pink Boots Assassin is in Miami. How convenient. Ghost tells Tasha he has to go to Miami to handle some business for Stern and take care of Pink Boots, and he assures her that he’s not going to see Angela.

We know that’s a lie. Ghost knows that’s a lie. But Tasha believes him anyway, because it’s what she wants to hear, and she makes love to him to remind him what he has back at home while he’s in Miami “taking care of business.”

Right before boarding a private jet to Miami, Ghost looks Shawn straight in the eyes and asks if he knew his father was getting out of jail early. Shawn denies knowing anything, but it doesn’t really seem like Ghost believes him.

Just as the plane is about to take off, in walks Angela. “Jamie, you trying to leave without me?” she asks him. “Of course not,” he says.

Angela thinks “Jamie” is clean and “Ghost” thinks he knows Angela isn’t building a case on him.

The funny thing is … at this point, “Ghost”/”Jamie” and Angela are literally honing in on each other and don’t even realize it. Especially Angela, she’s way more out of the loop than Ghost (or “Jamie”) is.