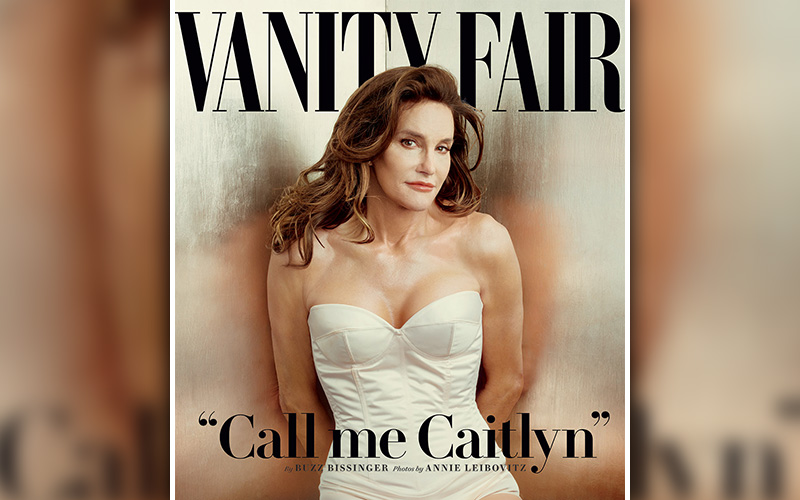 Say goodbye to Bruce Jenner, and hello to Caitlyn Jenner, the cover star of the July 2015 issue of Vanity Fair magazine, which was revealed to the world on Monday (Jun 1) with the header “Call Me Caitlyn.” Inside her 22-page cover story, which features a photoshoot by world-renowned photographer Annie Leibovitz, Caitlyn speaks publicly for the first time since completing her gender transition, following Jenner’s “coming out” interview with Diane Sawyer back in April.

Caitlyn compared her two-day photoshoot with Leibovitz to winning the gold medal for the decathlon during the 1976 Olympics, telling Vanity Fair contributing editor and “Friday Night Lights” author Buzz Bissinger:

“That was a good day, but the last couple of days were better… This shoot was about my life and who I am as a person.

Caitlyn said she had a panic attack the day after she went through a 10-hour “facial feminization surgery” back in March — a procedure which was supposed to only take five hours.

“What did I just do? What did I just do to myself?” she recalled thinking to herself. That’s when a counselor from the Los Angeles Gender Center came to her house so Jenner could speak with a professional, who assured her that everything was going to be OK.

Apparently, such reactions are often induced by pain medication and second-guessing yourself after a major surgery like that is human only temporary.

Jenner said the thought has since passed and hasn’t come back:

“If I was lying on my deathbed and I had kept this secret and never ever did anything about it, I would be lying there saying, ‘You just blew your entire life. You never dealt with yourself,’ and I don’t want that to happen.”

Caitlyn also started a twitter account, which amassed over a million followers in just four hours, setting a new Guinness World Record (which was previously held by President Barack Obama — who got 1M followers in 5 hours).

I'm so happy after such a long struggle to be living my true self. Welcome to the world Caitlyn. Can't wait for you to get to know her/me.

Another Jenner world record, and at 65? Who'da thought! Humbled & honored to have reached 1M followers in 4 hrs. Thank you for your support.

For the Jenner children, the issue of the transition has become a non-issue. They were already aware of their father’s identity as a woman when he told them individually about the transition—Burt and Cassandra had learned from their mother roughly 20 years earlier, when they were 13 and 11; Brandon had assumed it because of the obvious physical changes he had observed; and Brody was told by his mother when he was 29.

They tell Bissinger they feel both happiness for their father and inspiration at Jenner’s bravery, and they all still see their dad as their dad regardless of any gender label. Brandon said he was a little taken aback when he saw Caitlyn for the first time after surgery and she pulled her top up to reveal her new breasts. “Whoa, I’m still your son,” he reminded her.

As part of the transition, Jenner started hosting small gatherings called “girls’ nights” with wine and food where Jenner could dress as desired and feel natural in the presence of women, and it was there that her daughter Cassandra met Caitlyn for the first time. “I was just nervous that I wouldn’t make her feel comfortable,” Cassandra tells Bissinger.

“I was worried I wouldn’t say the right things or act the right way or seem relaxed.” But almost all of it melted away when she got there. “We talked more than we ever have. We could just be girls together.”

Despite the renewed relationship with their father, the Jenner children have refused to participate in Caitlyn’s docu-series for the E! network, set to debut this summer, forgoing financial gain in favor of preserving their father’s legacy.

Initially, Caitlyn was “terribly disappointed and terribly hurt,” but has come to accept their decision. For her part, Caitlyn is prepared for the criticism that it’s a publicity stunt: “‘Oh, she’s doing a stupid reality show. She’s doing it for the money. She’s doing this, she’s doing that.’

“I’m not doing it for money. I’m doing it to help my soul and help other people. If I can make a dollar, I certainly am not stupid. [I have] house payments and all that kind of stuff. I will never make an excuse for something like that. Yeah, this is a business. You don’t go out and change your gender for a television show. O.K., it ain’t happening. I don’t care who you are.”

Shortly after Jenner’s big Vanity Fair magazine cover reveal, ESPN announced that they would be honoring Jenner with the “Arthur Ashe Award for Courage” at the ESPY awards on July 15th.

The ESPYs will air live on ABC and will serve as Jenner’s first public appearance since completing her gender transition.

“In the past few months, the overwhelming outpouring of support from all over the world for my journey has been incredible,” Jenner told ESPN. “However, being honored with this award, which is named after one of my heroes, is truly special. For the first time this July, I will be able to stand as my true self in front of my peers.”

Caitlyn also plans to share more of her life in a docu-series for E! set to premiere July 26th.