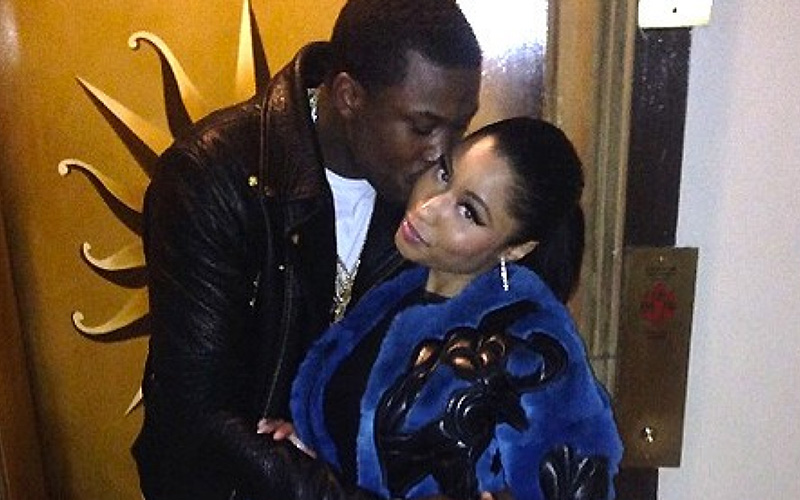 Meek Mill and Nicki MInaj are happily enjoying their relationship, but they aren’t ready to talk about marriage just yet.

During a recent interview with The Fader, Meek finally stepped forward and revealed that contrary to popular belief, he and Nicki Minaj are not engaged.

Rumors of the two rappers being on the verge of tying the knot sparked after Nicki shared with fans a photo of a huge diamond ring (that cost damn near a million dollars) last month Meek gave to her as gift.

However, Meek says don’t get it twisted, marriage isn’t in the plan as of right now. He told the Fader:

“It’s definitely real, but it ain’t really time to get married yet. We’re still learning each other, feeling each other out.”

Close friends to both rappers aren’t really buying the whole “we’re not engaged” thing though, and seem to have their minds made up about wedding bells ringing in the near future.

While performing at Coachella last month, Drake congratulated Nicki on her engagement.

Fader also reports the same month, T.I. had a brief conversation with Meek in L.A. about how confident he is that they are engaged.

“I ain’t engaged,” Meek insisted to T.I. in April, when the two ran into each other in Los Angeles during the reporting of Meek’s cover story. T.I. wasn’t having it. “You never asked her, ‘Will you be my girlfriend?’ But she is your girlfriend,” T.I. said. “You may not have asked her, ‘Will you marry me?’ But you are engaged.” Meek shrugged in response, as T.I. continued: “I’ve said my part. As long as you know what’s going on.”

We don’t blame Meek or Nicki if they’re actually not engaged and are trying to get to know each other better. I mean, why rush things? They’ve only been dating for a few months now. Give them some time.