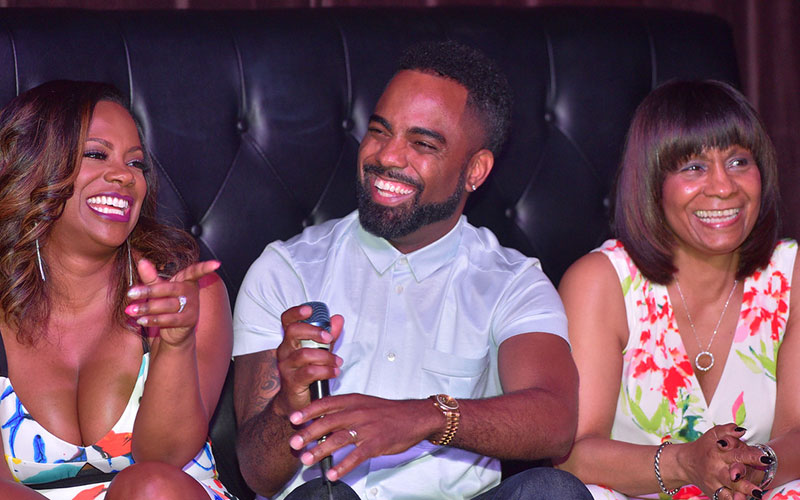 On Sunday night (May 17), Kandi Burruss celebrated her 39th birthday in Atlanta and hosted a viewing party for her new Bravo spin-off “Kandi’s Ski Trip” — which debuted that night — at the same damn time.

In addition to the stars of the show — Kandi, her husband Todd Tucker, Mama Joyce, Aunt Bertha, Aunt Nora, Kandi’s daughter Riley, her cousin Weenie and her BFF/assistant Carmon — a number of Kandi’s friends showed up ATL’s Suite Lounge to support.

After the screening, Kandi, Todd and the rest of the stars of “Kandi’s Ski Trip” sat down for a Q&A about their family vacation turned reality TV special.

“It was my idea to go on the trip,” Todd Tucker said during the chat, which was moderated by V-103 on-air personality Gerard J. “After my mom passed away, keeping our family close became even more important to me. And I thought this would be a great place to start.”

And even if the first episode didn’t show it, the family agreed that it worked. “I didn’t like him in the beginning,” the always outspoken and hilarious Aunt Bertha said. “But now, we all love each other. We are a close-knit family.”

Mama Joyce, who reportedly appeared to share a few warm moments with her son-in-law during the viewing party, added, “I’ll say we are all learning each other … but he’s gon’ have to get past my baby’s head scarf.”

Check out 30+ photos from the “Kandi’s Ski Trip” viewing party in Atlanta below: