Sick of this shit

“Sorry to disappoint anyone hoping to catch a real Waka Flocka Flame sex tape,” said Brick Bronson, 36BRICKHOUSE president, “But I think this joke was definitely worth it to build the buzz and drop what I think you’ll love as the official video for ‘Bust’ and Waka’s latest mixtape. Happy April Fool’s Day people!” 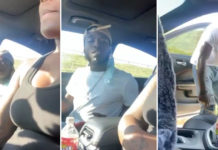