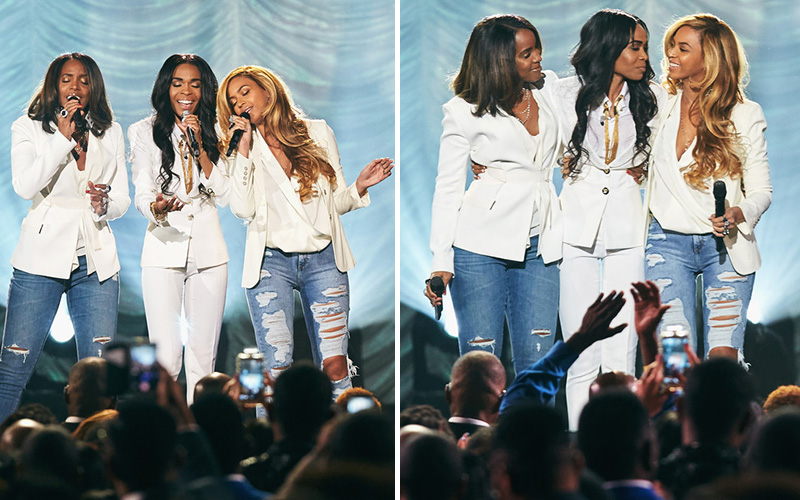 No, your eyes are not deceiving you. Destiny’s Child came together for a surprise reunion performance at the 2015 Stellar Gospel Music Awards Saturday night (Mar 28) in Las Vegas!

The performance kicked off with Michelle singing “Always Remember Jesus” a capella while two women with their backs turned to the audience harmonized in the background. When the ladies turned around and revealed that they were Beyoncé and Kelly Rowland, the crowd went wild.

CHECK OUT THE PHOTOS:

The surprise performance marks the first time the trio has performed together since Beyoncé’s Super Bowl halftime show two years ago in February 2013. Before that, their last time performing together was in 2006.

Michelle also took home her very first Stellar Award Saturday night for Music Video of the Year for “Say Yes.” After her win, she thanked the video’s director (and friend of GOT) Matthew Cherry, Beyoncé and Kelly a series of Instagram posts.

Thank you to each and every one of you that voted for #SayYes and a very special THANK YOU to @matthewacherry for directing this incredible video. And of course to my ladies to @beyonce and @kellyrowland for blessing the song. #StellarAwards

The presence of the Lord was definitely at the Stellar Awards last night! I was so happy to have my sisters @kellyrowland and @beyonce join me on stage to perform “Say Yes” for an amazing crowd. I really hope that this performance touches and heals someone. Nothing like old times! The Stellar Awards air next Sunday on TVOne! SayYes #DC3 A photo posted by Michelle Williams (@realmichellew) on Mar 29, 2015 at 11:52am PDT

The Stellar Awards is scheduled to air on TV One on Easter Sunday April 5th, but you can watch the raw footage recorded from the audience below: