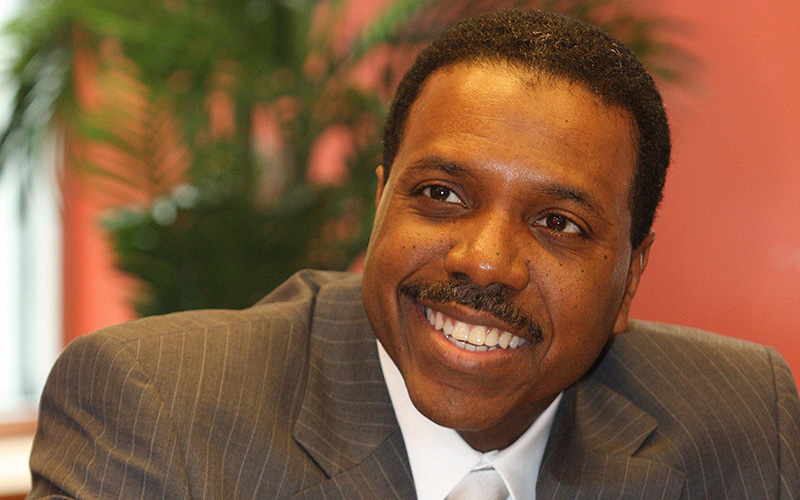 Creflo Dollar, an Atlanta-based televangelist and the pastor/founder of World Changers Church International, needs a shiny new private jet to aid him in spreading the word of God.

Dollar (he claims this is his real name, despite reports that he was born Michael Smith, which he says is an “urban legend.”) already owns a private jet, which “the ministry” purchased back in 1999 but it’s old and run-down now, so “the ministry” NEEDS a new one so that God’s work can continue to be done safely. Dollar — who preaches “prosperity theology,” convincing people that giving 10% of their income to his church will eventually increase their own material wealth — pleaded his case via his own fundraising website:

“The ministry’s current airplane was built in 1984, purchased by the ministry in 1999 and has since logged four million miles. Recently on an overseas trip to a global conference, one of the engines failed. By the grace of God, the expert pilot, who’s flown with Creflo for almost 20 years, landed the plane safely without injury or harm to any passengers.

“Due to this recent incident coupled with the 31 years the airplane has been in service, we believe it is time to replace this aircraft so that our Pastors and staff can continue to safely and swiftly share the Good News of the Gospel worldwide. Believe it or not, there are still millions of people on this planet who have never heard of Jesus Christ and know nothing of His greatness. Our hearts desire to see precious lives changed and snatched out of darkness and thrust into His marvelous light! We need your help to continue reaching a lost and dying world for the Lord Jesus Christ.

“We are asking members, partners, and supporters of this ministry to assist in the undertaking of an initiative called Project G650. The mission of Project G650 is to acquire a Gulfstream G650 airplane so that Pastors Creflo and Taffi and World Changers Church International can continue to blanket the globe with the Gospel of grace. We are believing for 200,000 people to give contributions of 300 US dollars or more to turn this dream into a reality—and allow us to retire the aircraft that served us well for many years.”

Jesus doesn’t fly commercial, and Creflo Dollar obviously think he should have to either.

The fundraising project known as “Project G650” — named after the $60 million Gulfstream G650 airplane Creflo wants to purchase — has since been deleted, but BELIEVERS can still donate money through World Changers Church International’s donations page.

Other than the aging private jet, Dollar and his wife Taffi Dollar are the proud owners of two Rolls Royce’s and several multi-million dollar homes. (They sold an NYC apartment for nearly $4 million in 2012.)

Dollar was arrested in 2012 for beating his then-fifteen year old daughter. He was charged with battery and cruelty to children, but he denied the claim and the charges were eventually dropped.