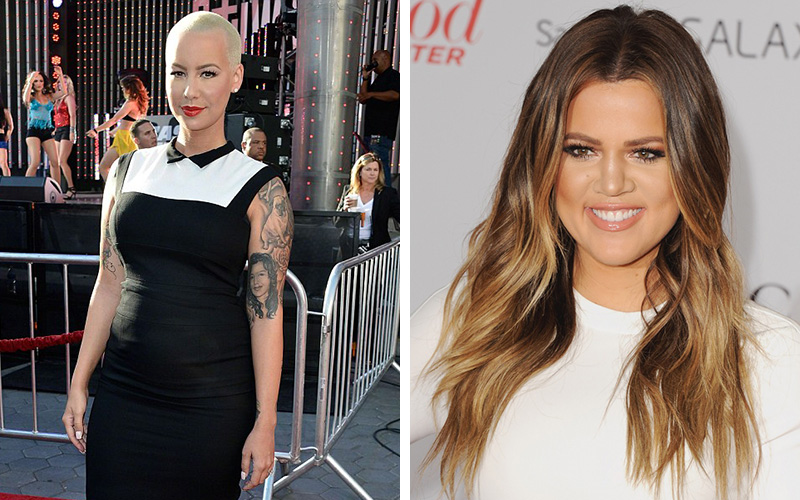 Things got pretty nasty on Twitter between Amber Rose and Khloe Kardashian after the two engaged in a strong war of words with each other. The takeaway? #DontPanic.

Amber and Khloe’s Twitter feud apparently started after Rose brought up Khloe’s little sister Kylie Jenner in an interview with the Breakfast Club.

“She’s a baby. She needs to go to bed at 7 o’clock and relax,” Rose said in reference to Jenner. “That’s ridiculous. [Tyga] should be ashamed of himself. For sure. He has a beautiful woman and a baby and left that for a 16-year-old who just turned 17.”

Amber also said she doesn’t necessarily hate the Kardashians, she just doesn’t respect them and called them “fake.” Nothing too harmful, right? Ha. Wrong.

After catching wind of Amber’s comments about her sister and her family, Khloe hopped on Twitter and slammed Kanye’s ex and basically called her out for being a former stripper.

“I was a stripper since I was 15 years old,” Amber Rose told Foxx. Please don't worry about my sister who has a career & her shit (1)

@khloekardashian: together at ONLY 17 ??? people who live in glass houses shouldn't throw stones. (2)

Please stop talking about us in interviews mama. None of us talk about you. (3)

She paused for a bit. Then continued:

We get asked questions about people all the time and my sisters and I always take the high road and don't answer. Truth is we don't know (1)

That's unfair. We all hear things via social media or blogs but I would only want to comment on someone (3)

if I actually knew them and or had my own personal history with them. I would think others would want the same respect.

She took another short break. Then added:

3 sides to EVERY story. His, hers and the truth. I'm not passing judgment but I wish others would do the same until they have FACTS.

Of course Amber clapped back, and that’s when the Twitter war began:

@khloekardashian I'm happy u brought up the fact that I was a stripper at 15….

@khloekardashian I'll be that lil whore to support my family like ur older sister is a whore 2 support hers. We're even ? #MuvaGivesFacts

And that’s how “#DontPanic” has now become a thing on Twitter (in case you didn’t already know).

@DaRealAmberRose lol #DontPanic well damn, I didn't realize I called you a whore… But at the end of the day

@DaRealAmberRose I guess people love to call us all whores. Easiest jab to throw. It is what it is. We still livin though.

Khloe then waved a flag of defeat by not only acknowledging the “#DontPanic” tweet, but cowardly deleted her acknowledgement of said tweet, forcing us to provide you with a screenshot instead of the actual message:

This is the part where Amber shrugs her shoulders like Kanye and retreats, but not really, because she apparently had a stash of memes saved up for this very moment:

Even Reggie Bush somehow got involved:

And Amber ended the war — long after Khloe waved her white flag, mind you — with this:

Yo @khloekardashian I'm really happy for u and I'm gonna let u finish but I have the best leaked nude… http://t.co/mwVQhssMN7

I'm so sick of these plastic ass hoes bullying ppl cuz they got the media outlets on payroll. Shits weak af

U think because ur dad was a professional football player that got away with murder ur better than me girl? Haaaaannnnn?

I'm done dragging this bitch. Lesson of the day children please don't try Muva cuz I will humble u. ?

If you didn’t catch it, Amber definitely threw shade at Khloe’s paternity issues, notably that old rumor that Robert Kardashian Sr. isn’t her real father because OJ Simpson is (never heard that one? you just did).

Also: #DontPanic has to be one of the funniest hashtags ever and Amber Rose has this Twitter/social media war thing down to a science. You go girl.