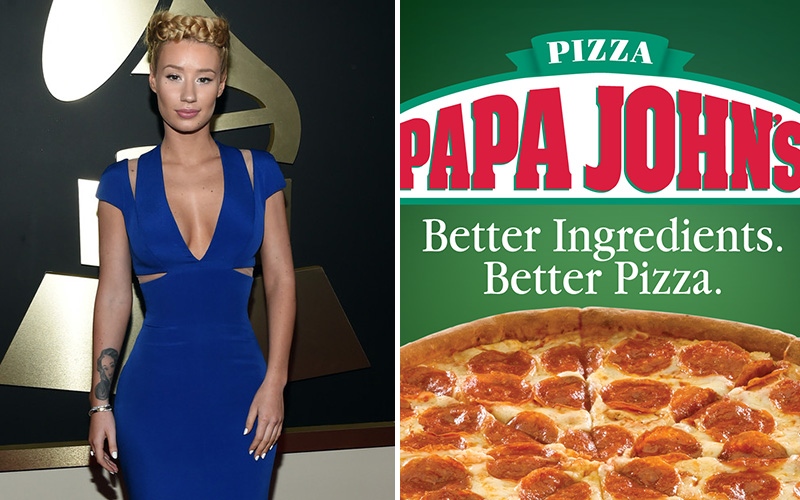 Iggy Azalea has declared war on Papa John’s and is threatening to file a lawsuit against the pizza chain after one of their delivery guys gave her phone number to his family members.

“Papa John’s was my favorite pizza but the drivers they use give out your personal phone number to their family members,” Azalea tweeted Sunday afternoon, just hours before the 2015 Grammy Awards.

. @PapaJohns was my favorite pizza but the drivers they use give out your personal phone number to their family members.

The rapper said she asked the supervisor at the restaurant where she ordered her pie for a photo of the guy so she could identify the guy who gave out her number (or put his picture all over social media, one of the two), but because of privacy laws, she wasn’t able to get the pic.

So Iggy blasted the company on Twitter until she she got the response she wanted. She even tweeted a screenshot of a text message she received from the delivery guy’s sibling claiming to be a fan.

@PapaJohns I ordered a cheese pizza but instead I got tons of calls and messages like this one. pic.twitter.com/fgKhydivXb

You know, to protect their privacy… Too bad they don’t value the privacy of their customers also. #DamnShame

@PapaJohns and this is all your supervisor has to say about it #ProfessionalAsFuck pic.twitter.com/kyQMWQADSq

@iggyazalea #We should have known better. Customer and employee privacy is important to us. Please don’t #bounce us!

After seeing the response from Papa John’s, Iggy continued her tirade agains the famous pizza chain, accusing them of “data breach,” demanding an explanation on how to fix the situation and threatening a lawsuit if they don’t “rectify [their] breach.”

@PapaJohns I don’t think data breach is funny. I expect you to contact me to explain how you are going to rectify your breach

@PapaJohns of my personal information in a satisfactory and professional way or lawsuit will be filed.

Fortunately for Iggy Azalea (and everyone else, for that matter) delivery isn’t the only option when it comes to getting a good pizza.