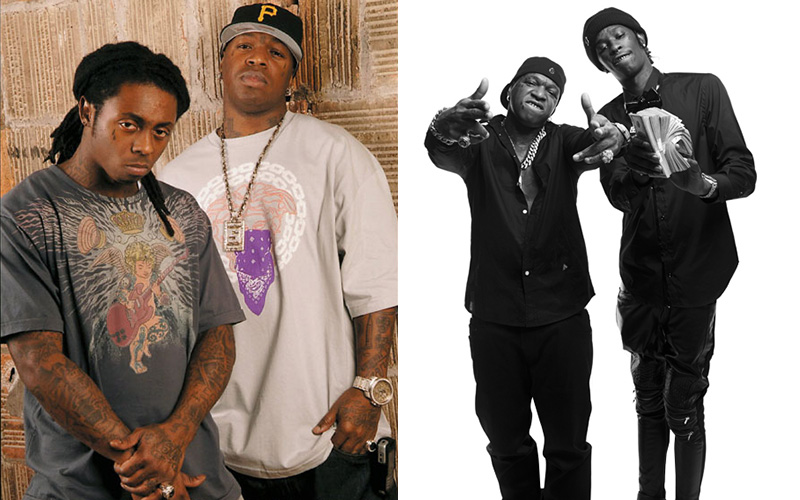 Based on recent social media postings, Young Thug and Lil Wayne appear to be fighting over Birdman’s affection. As Momma Dee would say, “It’s a shake-up in the palace and all the chambermaids are running amok!”

This is what Young Thug posted on Instagram Wednesday (Jan 21):

He captioned the photo: “Me and my love @birdman5star gone on lil bitty bitch…!!!”

It’s assumed that the “lil bitty bitch” Thug is referring to is Lil Wayne, the same guy he said was a major musical influence for him. Is he firing shots? Probably.

For years, we’ve all considered Lil Wayne to be Birdman’s “bottom bitch.” For the uninitiated, the Urban Dictionary defines a “bottom bitch” as such:

Apparently, Lil Wayne has not been fulfilling his duty as Cash Money’s “bottom bitch,” so Birdman the Pimp has been forced to hit the streets in an effort find someone else to fill the coveted position. That’s where Young Thug comes in.

Now, after watching Birdman release hundreds of songs and videos from Thug and Quan, Lil Wayne is feeling slighted because he can’t get his own album released. He’s been demoted to sidechick and he doesn’t want to play that position after being the bottom bitch for so long. Who would?

Now that Lil Wayne knows Young Thug has been handed his own keys to what Wayne feels is his empire, he’s lashing out.

Take these lyrics from the opening song on his newest mixtape “Sorry 4 the Wait 2” for example:

Now I don’t want no problems, I just want my money / Ain’t gotta hold no conversation or my luggage

According to TMZ, Birdman is far from pleased with Wayne’s mixtape, especially the lyrics above, and he feels “disrespected.” He’s reportedly doing everything in his power to prevent Wayne from getting out of his Cash Money contract and he only plans to release ‘Tha Carter V’ on his terms, not Wayne’s.

Meanwhile, Young Thug gets to release new music every other day and you can bet Birdman would never make him wait to put out his album.

Where is the love, Baby?