GOSSIPONTHIS.COM Celebs K. Michelle on Lil Kim: “I Will Not Fight with a Woman... 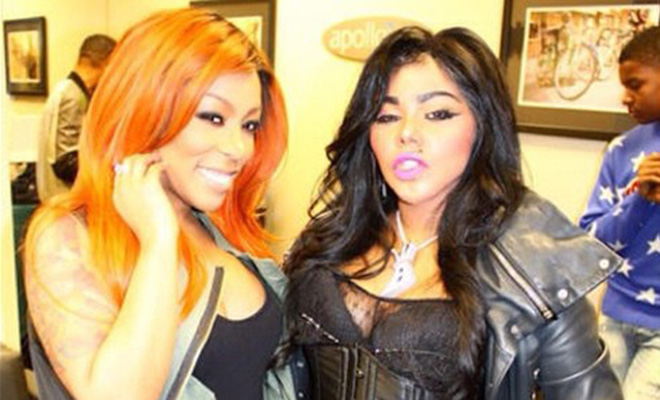 K. Michelle took the time out of her busy schedule promoting her new album ‘Anybody Wanna Buy a Heart?’ to fire back at Lil Kim for going on a long rant about her “Breakfast Club” interview.

Lil Kim and K. Michelle have been publicly beefing ever since K. dissed Kim’s fans in retaliation after they came for her when she called Nicki Minaj the “Queen of Rap.” K. suggested that Kim “should be doing some shit like breastfeeding instead of bothering me,” and Kim compared K. to a “bag of nuts.”

Lil’ Kim also allegedly asked K. Michelle to be the godmother of her daughter Royal Reign before she was born, a story which Kim denies, but K. continues to tell, like on her visit to Power 105’s “The Breakfast Club” this past Tuesday morning (Dec 16).

When K. was asked about her beef with Kim and Kim denying asking to be the godmother to her daughter, K. swore to “crackers and cheese” that the exchange between the two of them really happened before taking shots at Kim’s infamously botched plastic surgery:

“I swear for crackers and cheese — God strike me down — that girl asked me to be the godmother of her child. And I thought it was awkward myself … Her face is stretched back too tight, it probably affected her brain. I just feel bad for her face. Don’t talk to me until you get your original face back.”

It goes without saying that Kim was far from happy about K.’s comments, so she took to Instagram to “put an end to his once and for all,” and called K. Michelle an “insecure pathological lying sick psycho bitch.”

In the caption of an old photo she shared of her and K. Michelle, Lil Kim wrote:

I wasn’t even going to respond to this insecure pathological lying sick psycho bitch @kmichelle @kmichellemusic I got bigger fish to fry but enough is enough. I need to put an end to this once and for all. Remember this picture y’all right? . This was the first and only time I have ever met this chick. She says I asked her this day backstage to be the Godmother of my child.

If what I’m about to say doesn’t convince you of how much of a Looney Tune this chick is then I don’t know what will. You ready for this one?! NO ONE EVEN KNEW I WAS PREGNANT AT THE TIME OF THIS PICTURE… NOT EVEN MY OWN MOTHER!!!!! So why the FUCK would I ask this nobody ass Prozac popping bipolar bitch, tripping over $50 from my girl Paris @whoisparisphillips , who is a good and loyal friend, to be my child’s Godmother. Case closed. I don’t want to hear about this shit again. You’re done.

And as far as you talking about the presence that I grace in front of peasants like you. Surely jealousy and hate is the reason why haters like you attack my image which never stops nothing!!! Cause I’m moving out here!!! and niggas love me!!!! Chicks like you who pretend to love me just really wanna be me.

My mother always told me never argue with a crazy person because from a distance you can’t tell who the crazy one is. So stop trying to use me as a respirator to sell whatever you got going on at the time but I am into giving back to the community so here’s my charity donation to you.

I heard you dropped an album and I wish you all the success in the world and I hope you sell a ton of records. Let’s get ready for the new year y’all !!!! #lilkim #kmichelle #toasttoabeautifulandprosperousnewyear

Since K. Michelle is busy promoting her new album, no one expected her to respond to Lil Kim. But then again, we are talking about K. Michelle, who will find the time to involve herself in a war of wards on social media. And that’s exactly what she did.

I will not fight with woman who went platinum on PayPal. Sorry for my late response, I was so busy winning?