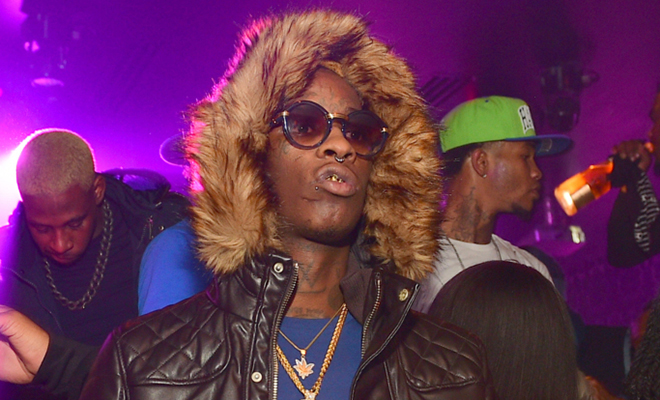 Atlanta rap weirdo Young Thug has been accused of being gay on several different occasions, like that time he called Rich Homie Quan his “hubby,” and when he called Birdman his “lover.”

He’s also known for calling his close friends “bae,” and he proudly paints his fingernails and wears overly effeminate clothing, like dresses for instance.

A couple of months ago at the BET Hip Hop Awards, when basically asked up front “Are you gay?” Young Thug denied it, saying there’s “nothing stupid and fruity going on.”

But in a new interview with Rolling Stone magazine, the suspect rapper admitted to having sex in a Georgia juvenile detention center that we’re going to assume was NOT co-ed because co-ed detention facilities don’t exist in the state of Georgia.

Growing up, the rapper (real name: Jeffrey Williams) was one of 11 siblings living with their parents in a housing project that was later demolished by the city. One of his brothers is currently doing time for murder, and another was shot to death when Thug was in elementary school.

“I was in the streets at eight, nine years old,” Thug says. “I was going to school so my dad and mom would keep buying me clothes, but when I got out I did what I wanted to do – fighting, all kinds of shit.”

A few years later, after a dispute over Thug’s classroom antics turned physical, he got kicked out of middle school. “I broke my teacher’s arm,” he says matter-of-factly. “Took his ass out. Pussy-ass nigga.”

He spent the next four years in a harsh juvenile-detention program. “Seven in the morning to six in the afternoon,” he says. “No windows or nothing, like a real jail. Lot of punishment. I didn’t do shit there but gamble, smoke and fuck.”

Somewhere along the way, he figured out that he had a seriously marketable skill. “Anyone can rap if you’ve got brains,” Thug says. “So I just went with it.” He released his first mixtape in 2011, and by last year, he was a major regional star.