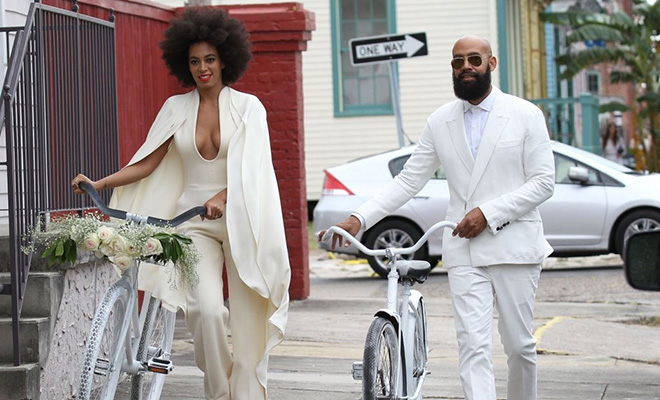 The wedding, which was held at the Marigny Opera House in New Orleans, was attended by a small group of Solange’s friends and family, including her sister Beyoncé, mom Tina Knowles, son Julez, bro-in-law Jay, her niece Blue Ivy and singer Janelle Monae.

According to details confirmed by People, when the happy couple arrived “via white-painted bicycles,” the bride was dressed in “cream pantsuit with a cape and plunging V-neck by Stéphane Rolland,” and the groom wore a matching white suit with no tie.

For the ceremony, Solange then changed into a floor-length gown designed by Humberto Leon for Kenzo. One onlooker said the couple “looked pretty calm, relaxed on their wedding day.”

Official photos from the wedding were posted at Vogue, including these fabulous shots of the bridal party wearing all-white: And videos showing Solange and her wedding party walking a “Second Line” were uploaded to Instagram:

As we previously reported, the wedding came after a weekend of festivities in New Orleans. About 50 friends and family joined Solange and Alan for a pre-wedding bash at the Indywood Cinema, where the couple reportedly showed a film they made about how they met before playing the 70’s film “Mahogany,” the movie they saw on their first date.

“It was pretty adorable,” Hayley Sampson, who owns the film house with brother Will, told People. “They were talking about how they met and that they bonded [over] this film and then showed everybody the movie.”

Partygoers were also treated to an open bar, featuring daiquiris from local sandwich shop Gene’s Po-Boys and drinks mixed by bartenders from nearby nightclub Oxalis.

“Everyone I worked with on the wedding are friends who I love,” Solange wrote in an email on Sunday. “Everything was a labor of love.”

This is the second marriage for Solange, who previously married her son’s father Daniel Smith in a shotgun wedding 10 years ago in the Bahamas before Julez was born. They divorced in 2007, and Solange started dating Alan a year later.

Check out more photos from the wedding here!