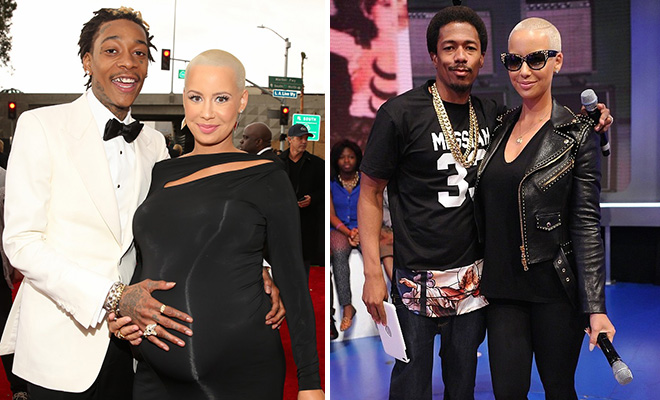 Amber Rose wants everyone to know that her soon-to-be ex husband Wiz Khalifa is a “serial cheater,” and that’s why she’s divorcing him. And Nick Cannon wants us all to know he had absolutely nothing to do with their divorce.

As we previously reported, Amber signed divorce papers Wednesday after a year of marriage and cited irreconcilable differences as the reason for the break-up, while also seeking full custody of their 1-year-old son Sebastian.

Sources close to the couple tell TMZ Amber believes Wiz has been cheating on her for months now:

Since the beginning of Wiz’s tour in July she strongly suspected he was stepping out.

Amber’s telling friends … she wanted to join Wiz on the tour but he came up with a panoply of excuses, the most frequent of which … she should stay home with their 1-year-old.

She also says he tried to show dominance by telling her he’s the bread winner and he needed to be left alone to make money and she needed to stay home.

Wiz, on the other hand, is reportedly telling friends that Amber stepped out on him with her new manager Nick Cannon.

But sources close to Nick are claiming that the “America’s Got Talent” host has kept things strictly business with Rose and only learned about Amber’s divorce through her lawyers last week.

Sources close to Nick tell TMZ … Nick and Amber — who just recently got into business together — have kept things strictly professional. Nick insists … NOTHING happened in the cheating department.

Nick claims he only learned about Amber’s domestic problems through her lawyers last week when he signed her on as a client. That’s when Nick says he found out her marriage was on the rocks and only then did the two share break-up stories.

Honestly, we believe that Nick is innocent. Wiz stays on the road and has to deal with groupies throwing themselves at him all the time. There’s no doubt in our mind that he has been creeping around. What rapper really doesn’t?

Wiz Khalifa has yet to publicly comment on the situation, but Amber Rose has been pretty vocal about it on Twitter, clearing her name regarding allegations that she cheated on him and thanking her fans for their support during this difficult and “devastating” time.