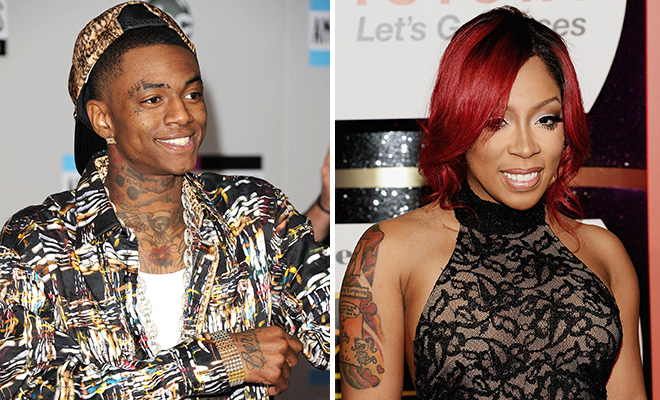 Soulja Boy has a new show to promote — VH1’s “Love & Hip Hop Hollywood,” for those who don’t know — so it’s no surprise that the “Crank Dat” rapper has found himself in the middle of a brand new Twitter war with none other than former “Love & Hip Hop” star K. Michelle.

In a recent interview with Power 105’s The Breakfast Club, K. Michelle discussed a number of topics, including her beef with her former bestie Elle Varner (who she now refers to as “curly head”) her Twitter beef with Lil Kim over K’s Nicki Minaj comment, and she also took a brief moment to clarify something that may have been implied by Soulja Boy in a recent interview of his.

“I watched an interview and it was Soulja Boy and they were asking all the men of Love & Hip Hop L.A. who would they bang, they said me. OK, great,” the R&B songstress explained. “But Soulja Boy implies that he slept with me.”

K. Michelle told Breakfast Club hosts Charlamagne, DJ Envy and Angela Yee when asked straight up if he had sex with her, Soulja boy responded with “Nah, I ain’t say that,” but she says that he was giggling under his breath, making it seem otherwise, to which she said: “You can giggle on these nuts.”

She went on, “Let me tell you something Soulja Boy, cause I know you’re gonna hear this. What you’re not gonna do is lie on my hot pocket. When I do something, I say I did it and that’s what it is. So that giggling… We don’t wanna giggle about that transgender in Atlanta. Giggle, giggle, now crank that. You don’t play when it comes to me and my hot pocket. I never seen you or met you a day in my life.”

After catching wind of K. Michelle’s Breakfast Club interview, Soulja Boy took to Twitter and blasted K for having a pussy that “smell like shit.”

And from there it was an all-out Twitter brawl and neither one of them pulled any punches, with Soulja re-iterating his opinion on the smell of K’s vagina, and her putting him on blast for allegedly sleeping with transgenders in Atlanta.

See the entire exchange below:

@kmichelle my ananconda don't want none unless u clean those shitty buns Hun ??

This shit so petty. She go and make false claims on Live radio to millions on something i never said now she mad when I check her ass

@kmichelle its over i killed you stop tweeting me. You shoulda have just took the compliment and ur net worth is public info dumb ass ???