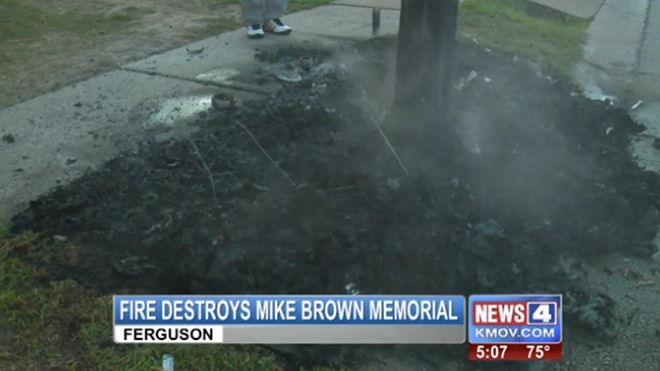 Just when you thought the Michael Brown tragedy couldn’t get any worse or any more heartbreaking comes news that a memorial for the unarmed black teen who was gunned down by police officer Darren Wilson in Ferguson, Missouri has been burned to the ground. And not even a month after cops reportedly drove over another memorial and let a police dog urinate on it.

A video posted to YouTube shows an area below a post (where memorials are typically constructed) engulfed in flames as a crowd stands around in shock.

“They burned down Mike Brown’s memorial… this shit [is] getting crazy. What the fuck?” one distraught woman can be heard behind the camera, while another man in the background yells, “That’s fucked up, cuz!”

“Who would do some shit like that?” the distraught woman asks.

And that’s the big question here: WHO WOULD DO SOME SHIT LIKE THAT?

Brown’s own cousin Sabrina Webb says she believes it was someone trying to instigate an already intense situation that has been going on for well over a month now.

“I think it may have been somebody trying to push our buttons, seeing what we are going to do next … we’ve been slowly protesting every night. They think it’s died down, but it never died down. It just started to become very peaceful,” Webb told local St. Louis news station KMOV.

Meanwhile, police believe candles were the cause of the fire that destroyed the memorial Tuesday morning. But since these are the same people who drove over another memorial for Brown, and also let a police dog pee on it, we shouldn’t really take their theories into consideration.

According to NBC News, the Ferguson Fire Dept. was called at around 6:45 a.m. Central Time to Canfield Drive in the St. Louis suburb, an area close to where Brown was killed on August 9th. Firefighters reportedly used portable water extinguishers to put the flames out.

Supporters have since put up a new memorial for Mike Brown in place of the one that was burned down.

We fixed the memorial4 #MikeBrown tragedy brings us together this backfired on the police sympathizers #Ferguson pic.twitter.com/CaCehySJOD

A recent MSNBC poll reveals that out of 33,000 votes, only 17% believe Michael Brown’s shooter Darren Wilson should be arrested. 5% say “Maybe,” and a whopping 78% believe he shouldn’t be arrested at all.

Do YOU think Darren Wilson should be arrested?