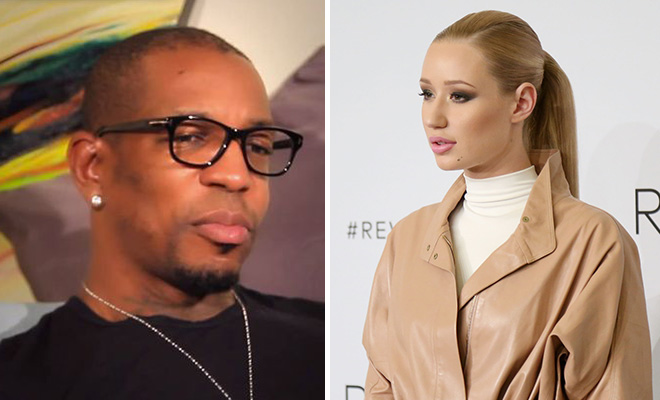 Iggy Azalea is reportedly suing her ex-boyfriend, the same guy who is peddling a purported sex tape, for releasing music early without her permission and forging a contract.

According to a lawsuit filed last Wednesday (Sep 17) in California federal court obtained by The Hollywood Reporter, Azalea (real name: Amethyst Kelly) was living out of a hotel in Houston, Texas in 2008 while working on her music.

At the time, she met an older man named Maurice Williams (aka rapper Jefe Wine), who told her he was a “partner in an oil company.” Soon afterward, the man put Iggy up in an apartment, but what Azalea didn’t know at the time, was that Williams was already married with children.

From there, things (obviously) went downhill.

Williams followed Azalea when she moved to Atlanta in 2009, according to the lawsuit, and he moved into her house. Around that time, “Williams downloaded the entire contents of Azalea’s personal computer,” including unreleased master recordings.

Flash-forward to July 24, 2014, when a press release hit the wire announcing a joint venture among Primco, ESMG, Top Sail and Wine Enterprises, Inc., claiming that they had “secured the rights” to release an EP by Azalea titled Inizio. The press release quoted Williams as saying, “We believe the merger will be monumental because the projects that we have coming down the pipeline are going to shock the world!”

According to Azalea’s lawsuit, the music derived from her unreleased masters and constitutes violations of her copyright, trademark, name and likeness. She’s also alleging conversion of stolen information from her computer.

In August, just as Azalea was experiencing new stardom from “Fancy,” the summer’s hottest single, songs from “Inizio” began appearing on iTunes, the Google Play store, Pandora, Spotify and elsewhere.

The pop musician and Universal Music reacted by sending out cease-and-desist letters. The retailers bowed to the demand for removal, but suddenly the situation became even more troublesome.

Although Azalea’s lawsuit is silent on the subject of a sex tape, TMZ began making noise about one allegedly featuring Azalea. Carefully, the tabloid site didn’t say it had actually obtained such a sex tape. Instead, TMZ quoted Vivid’s Steven Hirsch as having seen it.

Later, TMZ hedged about whether it was really her, and finally, TMZ quoted Williams as saying he had an agreement that gave him exclusive rights to “manufacture, sell, distribute and advertise ‘any’ recording embodying visual images” of Azalea’s.
Azalea has a retort — it’s a forgery.

The complaint obtained by The Hollywood Reporter explains that around the time that Williams was living with Azalea in Atlanta, he introduced her to a man named Kareem Chapman as a potential manager. Shortly thereafter, Azalea signed an artist management agreement with Chapman’s firm. Williams allegedly kept Azalea’s copy.

That old agreement has allegedly been transformed into a “music recording and composition agreement” with sly finger work on Williams’ part.

“The Forged Agreement contains tell-tale signs that it is not genuine,” states the lawsuit. “For example, it includes mismatched fonts on the signature page, paragraph numbers out of sequence, a signature line for ‘Wine Enterprises, inc.’ [sic] (rather than for an authorized agent), and provides, as an address for legal notices, the contact information of an attorney who had no prior knowledge of the Forged Agreement.”

So now Azalea asserts that Williams really has no real rights to her music and is suing him for violating copyright on such songs as “It Ain’t Tricking,” “U Ain’t My Daddy,” “Take My Picture,” “Red Bottoms,” “Supernova” and “Miss International.”

She’s also seeking a declaration that he and companies doing business with him have no right to use the “Iggy Azalea” mark or to control commercial uses of her name and likeness.

Even though, as we previously mentioned, this is the same guy who’s supposed to be trying to sell a sex tape he has with her, yet there’s no mention in the lawsuit of that.

But, as The Hollywood Reporter interestingly points out, the complaint does mention that the defendants came out with promotional videos featuring an impersonator of Azalea,” which means that supposed “sex tape” could be (and likely is) just a video with the look-alike.