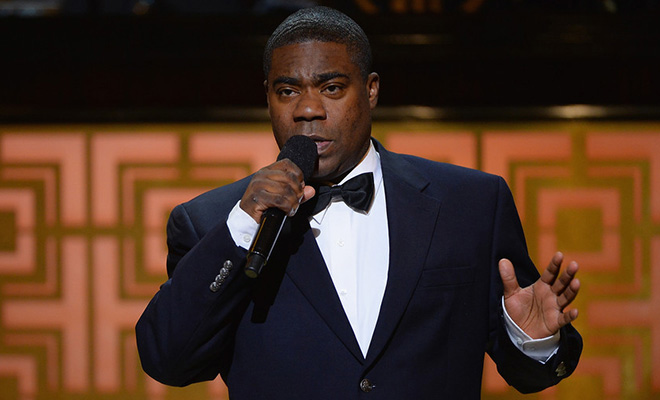 An attorney for the comedian says the former “30 Rock” actor continues to struggle from the June 7th six-car accident on the New Jersey turnpike that has not only left him critically injured, but also claimed the life of his mentor (a fellow comedian) James McNair aka “Uncle Jimmy Mack.”

45-year-old Morgan suffered broken ribs, a broken nose and a broken leg in the crash, which also injured three other people.

Morelli said Morgan is currently undergoing at-home therapy following his release from a rehabilitation facility in mid-July. Morgan now relies on a wheelchair for mobility, and it may be months before he’s able to fully walk again, Morelli said.

“He’s making incremental progress,” Morelli told the paper. “But they’ll have to wait another month before they assess him cognitively.”

Kevin Roper, the 35-year-old driver of the Walmart tractor-trailer that slammed into Tracy Morgan’s limo bus, pleaded not guilty to vehicular homicide and four counts of assault by auto. It was reported that he had not slept in over 24 hours at the time of the accident.

Tracy Morgan filed a federal lawsuit against Walmart last month, accusing the retail giant of “negligence” in connection with the crash, meanwhile James McNair’s adult children have said they plan on suing Walmart and the truck driver.