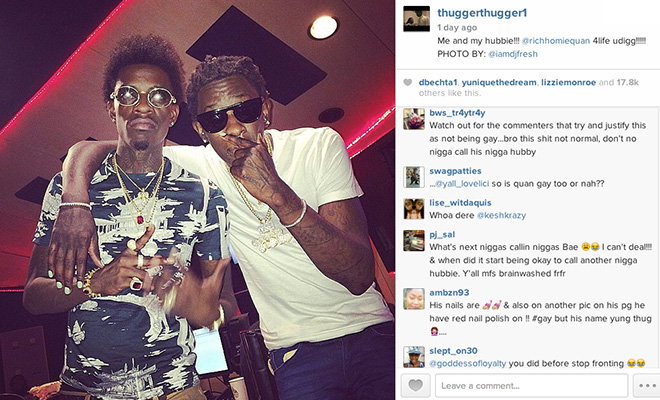 Rumors have been swirling for months that Young Thug is Hip Hop’s first openly gay trap rapper, thanks to his painted fingernails, overly effeminate attire and his penchant for calling close male friends his “babes” and “lovers.”

Earlier this week, the Atlanta rap weirdo did nothing to help his situation by Instagramming a photo of himself and fellow ATL rapper Rich Homie Quan in which he referred to Quan as his “hubbie.” (Not to mention those neon painted fingernails. HEY GIRL!)

Of course Twitter lit up with responses and questions surrounding Thugger’s sexuality have returned with a vengeance:

Young Thug gay Af for calling Rich Homie his hubbie . 1 of yall thugger fans explain this for him ..

When Yo Friend Don’t Believe Young Thug Gay & U Show Him Some Suspect Bars https://t.co/cvApA4KBEA

“Well I’m just saying I think it’s pretty immature of you guys to not like Young Thug just because he’s gay” pic.twitter.com/51J5OFCbxG

Charlamagne Tha God, DJ Envy and Angela Yee discussed the situation on the “Breakfast Club” yesterday and asked their listening audience if they thought it was acceptable for “straight” men to call other “straight” men bae or hubbie.

So the question remains … do YOU think it’s acceptable for “straight” men to call their best friends “bae” or “hubbie?”