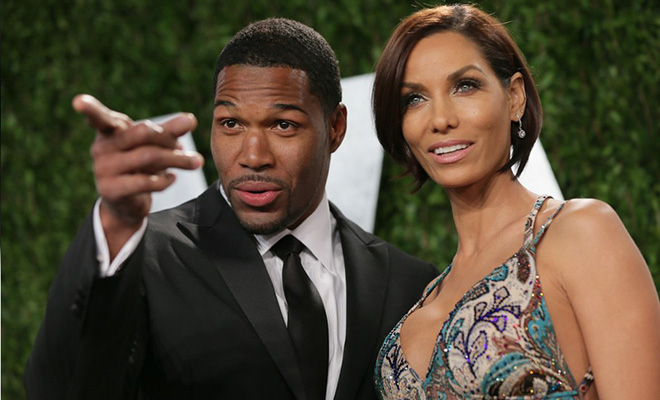 Michael Strahan and his fiancée of five years Nicole Murphy ended their relationship Friday (Aug 1), with reps for Strahan telling People magazine that the couple’s split was amicable, and they called it quits due to their busy work schedules, which made it hard to keep their relationship up.

The engagement was publicly called off just one day before Strahan was due to be inducted into the Hall of Fame, and following the surprise announcement of Nicole and Michael’s split, reports are now saying the NFL star was totally blindsided by the news.

According to reports, though the announcement of the couple’s split came Friday, Strahan and Murphy had been broken up privately for weeks and there was allegedly no plan initially from Strahan’s camp to break the news the same weekend of his induction into the Hall of Fame.

But after Nicole announced that the engagement was off, Michael had no choice but to follow suit with his own statement.

The former football player was inducted Saturday, cementing his position as one of the greatest defensive players in the sports history.

Several people close to Strahan think the “timing was extremely suspect.” However, it does not seem the breaking of the news had much of an impact on him, as the 42-year-old began his speech on by saying, “This has been the best weekend of my life.”

The retired NFL player’s rep told People, “They love each other very much, but with the distance and work schedule, it has been hard to maintain the relationship.”

46-year-old Nicole Murphy and 42-year-old Michael Strahan — who have nine children between them (but none together) — first started dating in 2007, and Strahan popped the question in 2009.

“I have a great relationship and she’s a great girl,” Strahan said at the time. “I don’t like to talk much about my private life, but I’m really happy.”