GOSSIPONTHIS.COM Celebs Does Ice T Feel Some Type of Way About Jay Z Not... 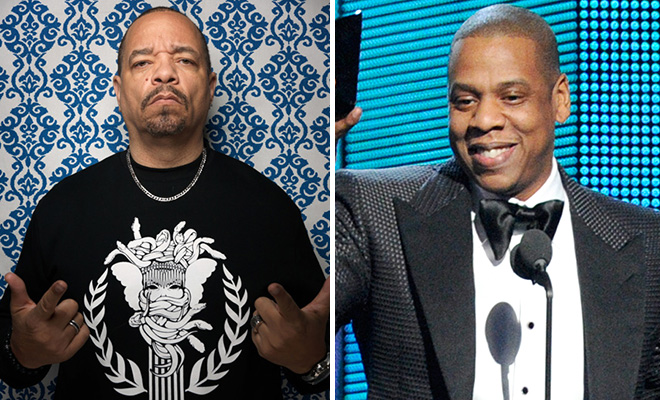 “If you’re having girl problems I feel bad for you son, I’ve got 99 problems but a bitch ain’t one!”

That’s the hook from Jay Z‘s “99 Problems,” one of his biggest hits, and while most, if not all, Hip Hop heads are well aware that the entire line comes from Ice T’s “99 Problems” (ft. Brother Marquis), a lot of people have no idea and would totally lose out on that question if a game such as Rap Jeopardy existed.

“Brother Marquis from 2 Live Crew, he made the hook,” Ice T says of his own “99 Problems” song, which appeared on the Los Angeles rapper’s 1993 album, Home Invasion. “We were talking about ‘Whoomp! There It Is!’ [by Tag Team] which was a big hit, and he said, ‘Man, all the days when I was in Magic City and the girls would bend over and the DJs would say, “Whoomp! There it is!” It was the phrase that pays!’ And then out of nowhere he said, ‘Man, I got 99 problems, but a bitch ain’t one!’ I said, ‘That’s a song [title]!’ So I made the song and called him to do a verse on it. [Years later], Chris Rock heard the song, and told Rick Rubin that Jay Z should remake it. They paid for the publishing and they made the song.”

Jay Z’s own “99 Problems” song was released in 2004 as a single from his eighth studio album The Black Album.

“Why Jay Z never said, ‘This is Ice-T’s song,’ and showed me some love, I don’t know,” Ice T says. “I’m friends with Jay. I met him with Big Daddy Kane. I would have handled the situation differently. If I use your music, I want to let people know. You hear my song ‘Shut Up, Be Happy,’ that’s Black Sabbath in the background. I think that being a real life player, there’s nothing you like better than to give props with other people. That’s just what you should do. But you know, that’s how I get down.”

The issue was brought up last month in a Rolling Stone interview when he was asked if it bothered him that people forget that the song — which he’s re-releasing on his metal band Body Count‘s next album Manslaughter — was basically his first.

“Not really. ‘Cause you gotta remember, I’ve been on Law & Order 16 years, so if a kid is 18, he was two years old when I went on Law & Order. So I don’t think everyone is historians and stuff. Jay Z went through all the correct procedures. He didn’t steal the record. He paid publishing. But you never heard him say, ‘It’s Ice-T’s record.’ So Treach from Naughty by Nature’s a good friend of mine, and he said, ‘Jack back.’

“When we would do rehearsals, the band would always play ’99 Problems,’ the music. And I would say the real vocals. We figured, ‘Fuck it, we’re doing an album. Let’s do it like a skit.’ It was also meant to catch fans out there. When this record comes out, a lot of fans will go, ‘Oh that’s Jay Z.’ And then their buddy gets to smack ’em in the face [laughs].”

He also said that he “loved” Jay Z’s version of the song, so overall, Ice T doesn’t sound “mad” over Jay Z not giving him a shout-out or publicly thanking him for basically giving him a hit … but Ice does seem like he feels some type of way about it.

The whole situation is funny though, because almost 10 years ago Brother Marquis (real name: Marquis Ross) filed a lawsuit against both “Jay-Z” and “Ice-T” (back when they both used hyphenated monikers) requesting royalties from Jay Z’s “99 Problems,” of which Jay holds the copyright to, of course.

Ross alleged that the chorus of Jay’s song was similar to the lyrics and beats he wrote for Ice’s song (obviously), and he also claimed in the suit that Ice refused to pay him royalties until 2005 when he made a “partial payment” of just $10,000. In addition to back royalties, Ross was also seeking punitive damages in the suit.

We assume they either settled out of court (or Brother Marquis just dropped it altogether) because the suit never went past the “file” stage.