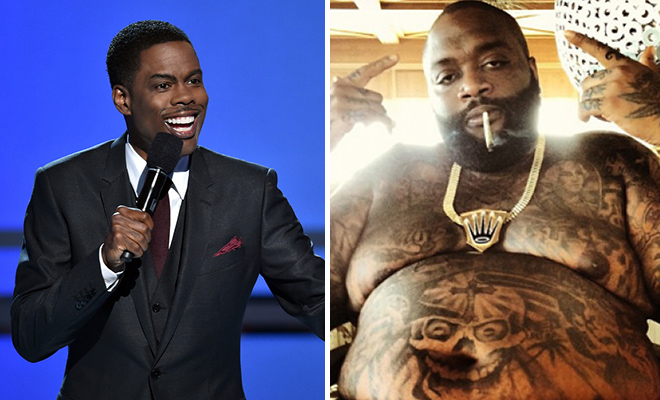 Last night, Chris hosted the show and took jabs at several celebrities … everybody from Solange and Jay Z to T.I. and Paris Hilton

But it was Ross who the comedian continued to roast throughout the whole evening.

Rock said Rick Ross is releasing a new brand of headphones “dia-Beats” and it can be “placed on your swollen foot before you chop it off.” He then continued his assault on Ricky Rozay and his weight by saying he’ll be the first rapper to die from breast cancer.

Chris Rock mocked Ellen’s ordering pizza during the Oscars, when she passed out slices to the crowd. Chris Rock wanted to put his own spin on it, and passed out L.A. soulfood staple, Roscoe’s Chicken and Waffles, to the crowd. He then took out a salad and said “this one is for Rick Ross.”

There was a portion in the show when Chris Rock claimed that there wasn’t enough time to announce all of the awards on- air. He announced the winner for the “Worst Interracial Sex Tape” award. He said the winners were Rick Ross and celebrity chef, Paula Dean

Ross, who wasn’t in attendance at the BET Awards, tweeted in response to Rock’s jokes.

We have to admit Chris Rock did go in on Rick Ros pretty hard … but dammit the sh*t was funny!