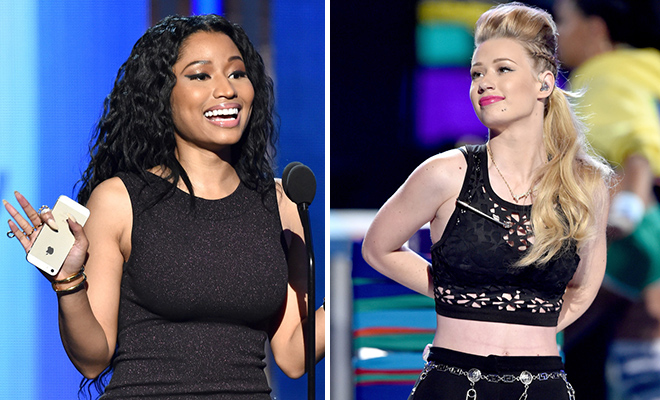 Uh-oh… looks like another Hip Hop beef is brewing!

For the fifth straight year in a row, Nicki Minaj won the award for “Best Female Hip Hop Artist” at the BET Awards and during her acceptance speech, she offered remarks that some people have taken to be a diss toward T.I.’s Hustle Gang artist Iggy Azalea, whose career has really taken off over the past year.

While accepting her award, Minaj referenced writing her own lyrics, an apparent jab at Azalea, who allegedly uses the talent of ghostwriters for her songs.

“What I want the world to know about Nicki Minaj,” she said, “when you hear Nicki Minaj spit, Nicki Minaj wrote it … I hope and pray that BET continues to honor authenticity.”

After everyone in the crowd expressed how shocked they were, Nicki quickly said, “No, no, no shade, no, no, no shade,” but that didn’t stop folks on Twitter from calling it how they saw it:

Nicki just fired shots at Iggy. damn I wish this was the source awards. she could have said her name.

For what it’s worth, Nicki also kinda sorta “took over” Iggy’s “Fancy” performance when the BET cameras cut to her:

Iggy Azalea has yet to respond regarding to the allegations of shade being thrown at her.