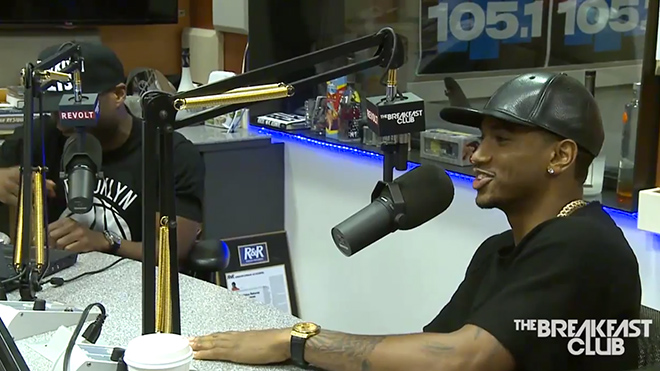 During his stay, Trey spoke on not having beef with August Alsina, his relationship with Chris Brown, being in love only twice in his life and more.

On August Alsina:
Laughs. I haven’t seen the video [of August going off at a recent concert.] My thing is when you first get in this thing and you do interviews, you’re not used to people like Charlamagne and Angela who come and have you in a trick bag. Have you in your feelings. That’s something new to a new artist. I know where his heart is. Earlier in an interview I said I rock with dude. I believe in him. I think he’s very talented. He’s dealing with a lot in his life outside of music. Y’all mentioned he lost his brother. He’s taking care of nieces and this ain’t even my business to tell this information but I feel like as far as our relationship is concerned I feel like people need to know that I’m off that. I was on that, but I think my temper might have been worse than his.

We good. I’m not into none of that. I’m trying to get my money right. I think one of the things that’s crazy about hip hop culture that you see nowhere else is that we’re always trying to bring each other all the way down. You gotta have this beef and that beef and this quarrel. I’m cool man, it’s enough room for all of us to be successful and make money.

On if he’s spoken to Chris Brown since he was released from jail:
I spoke to him this morning. He actually text me this morning. He’s out and on his way here. You know I didn’t speak to him to hear his voice but he’s out and he’s good.

On why his bond with Chris Brown is so tight:
Chris and I, we actually did our first tour together. I actually posted on my Instagram like nine pictures of the throwback moment; me, Chris, Nicki, Drake and a whole bunch of people. Chris and I did our first tour together and I always looked at him as a younger brother and now we’re adults. He was so much younger than me when we first got in the game. He was 16 and I was 20. He came out on that tour and probably did like eight dates on like a 20-show run. I remember him just blowing up. Just seeing him go from this little energetic kid that loved everything about it to where he is now. Seeing what he’s been through. Me being there earlier in his career and us having a bond earlier in his career with everything that’s happening in his life. The trajectory in my career was much slower than his. His was much more gradual. I was able to embrace and deal with things differently. I was able to jump off stage and f–k n—as up and not get sued for it. I was able to do all that, that he wouldn’t been able to do, that he would get sued for millions of dollars for.

So I just feel like at this point in his career when he’s a man and he’s dealing with a lot of stuff, it’s a lot of people who abandoned him. I’ve been his homie and right now I feel like he needs somebody he knows that’s down for him and I’m down for you dawg. Like I said I want to see us all successful. Like, a lot of people will see it like, ‘Chris is locked. This is my time. I can take that ring,’ but that ain’t what it’s about. If there aren’t other people in the genre that can push it forward, no one to compete with, that’s wack.

Big had Pac, as far as music is concerned, you had that pushing the culture forward. You had the fact that it was two greats. I just want to make sure that we push each other forward and I’m at the point in my life where I’m just so happy about everything. I’m happy about my music. I’m happy my family is taken care of. I’m wealthy. My music is sounding amazing and if I could help my dawg out in the meantime, I’m cool with that.

On if he’s going to be more personable since a lot of people feel as though they don’t really know him
Actually, throughout my career, I ain’t want people to know too much. I give you my music and I give you so much of me just outside of what it is that I do within my life; taking care of my family and CEO of my company. Relationships that people try to pry into I try to keep people out of outside of the music that I love to make.

People pry into everything. In this album, I am speaking about a lot of different things. People want to know what’s going on with me love wise. This, that, and the other. No, I’m not in love. I’m an R&B singer. I’m not in love. Have I been in love? Yes. Am I having sex after a party with three girls sometimes? Yes.

I assume your ex-girlfriend got married?
Who are you talking about?

Helen.
She’s not married. Nah, I love Helen to death. I’m happy for her though.

So she didn’t get married or she did?
She’s engaged.

Lauren London?
What about her?

No, I’m just saying I’m assuming the two people you were in love with were Helen and Lauren. The two that met his mom.
Yeah, you’re right.

On why he always does songs with rappers and wanting to do an R&B Tour
I would love to do an R&B tour. I think the culture would love it as well but it’s comes to a point where it’s so integrated where the two are almost synonymous. What I love about my position in music is that I could put out ‘Smartphones’ and have ‘Na Na’ at the same time. Two totally different records, and I think R&B is in a good place, but I think hip hop has just taken over the world.

You got Katy Perry on trap drums. You got Miley Cyrus…you got Justin Bieber putting out [records with the Migos]. It’s different, the complexion of music is different. I don’t know if we need to change it or what would happen for R&B to emerge in a different light but I can guarantee that I have some great R&B music. I’ve actually played you a lot of the music from this album about two months ago. A lot of those records are still on the album. I actually added some records as well. I think R&B is in a great place.

WATCH THE INTERVIEW ABOVE