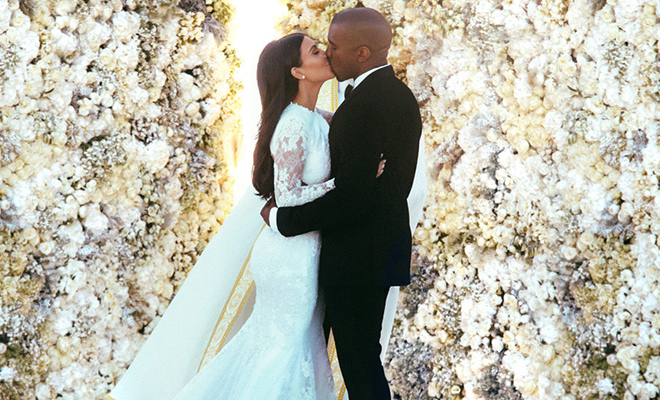 The first official (AND CLEAR) photos of Kim Kardashian and Kanye West as a married couple have been released.

We’ve seen the blurry photos from far away, as well as the numerous photobooth pics from the reception, posted on the Instagram, but thanks to E! News, we can now take a closer, more professional look at the Kimye wedding.

Kim and Kanye exchanged vows in front of their friends and family at the Forte di Belvedere in Florence, Italy, and the first photo of the newlyweds on their wedding day shows them sharing their first kiss as husband and wife in front of a beautiful wall of flowers. In another “first photo,” the just married couple can be seen walking down the aisle, not too long after saying their “I do’s,” and if you look closely, right behind Kim is Baby North in Grandma Kris Jenner’s arms, watching her newly married mommy and daddy getting congratulated on their big day. Kim and Kanye were both dressed in Givenchy, and E! News also has a photo from Kim’s final dress fitting at the Givenchy studio in Paris with her close Riccardo Tisci, who also designed her wedding dress.

After the lavish wedding ceremony, Mr. and Mrs. West were joined by their guests for a similarly extravagant reception, which included a four-course meal and a massive seven tier wedding cake. According to E!, Kim changed out of her wedding dress into a “cream-colored, custom Balmain dress” for the reception, where both Kris and Bruce Jenner gave heartfelt speeches (Bruce cried… awww!!), and John Legend also serenaded the newlyweds with “All Of Me.”

But the most memorable moment of the night had to be Kanye’s “epic” 20-minute speech about the pitfalls of fame and the Kardashians’ status as the “most remarkable people of our time.”

According to our source, the speech was very Kanye-esque, meaning it was as sweet as it was “huh?” At one point, Kanye called the Kardashian family an “industry” and “the most remarkable people of our time” who can “make the world a better place.”

He also reportedly went on a rant worthy of a Harrison Ford movie that includes the hijacking of Air Force One.

‘Ye went on and on about the culture of being in the limelight and that all the spoofing and tabloid covers don’t get him or the Kardashian family down. “I am defined by being a celebrity…the world is our altar,” he announced to a cheering room. “We are not stupid!”

Our insider said that Kim’s new husband got very heated during certain parts of his speech, but he also had very sweet things to say about his new bride. He called her the “ideal celebrity” and the “ideal art,” and he gushed about spending “every day of my life with Kim.”