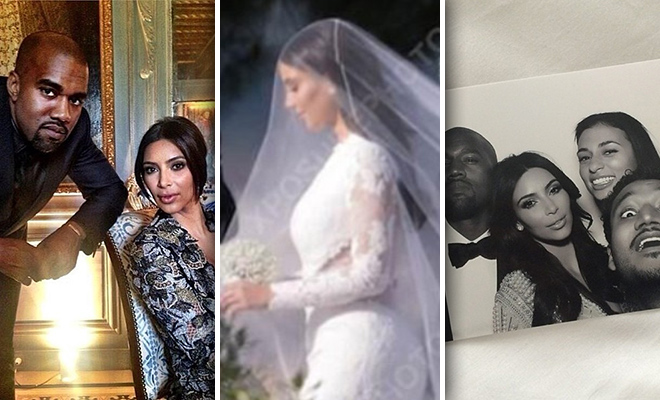 After a whirlwind of weekend festivities throughout Europe, Kim Kardashian and Kanye West finally tied the knot with an extravagant wedding ceremony at the Forte di Belvedere in Florence, Italy on Saturday (May 24).

The busy weekend for the couple and all of their family/friends kicked off with a brunch hosted by fashion designer Valentino in Paris on Friday.

Later that night, hundreds of guests were invited to the Palace of Versaille for a private tour and surprise performance by Lana Del Ray before being flown to Florence via private jet for the wedding ceremony.

Kim and Kanye were spotted at the altar during their wedding ceremony, as revealed by this photo a fan tweeted: Another photo shared on Instagram shows Kim walking down the aisle in a beautiful, flowing white wedding dress: After the newlyweds traded vows, their family and friends took to a photo booth at their reception, where everyone posed for a bunch of fun photos which they later posted to their respective social media accounts, namely Instagram.

Other than the Kardashian-Jenner clan (sans Rob) among the long list of celebrity attendees at the Kimye wedding were Big Sean, Common, Tyga, Blac Chyna, Italian shoe designer Giuseppe Zanotti, Jaden Smith (who wore a white batman suit…WTF?), Girls Gone Wild creator Joe Francis, Chrissy Teigen and John Legend, who reportedly sang his tearjerker of a hit “All of Me” for the bride and groom.

Check out the photos from the wedding and pics from the photobooth at the reception here: