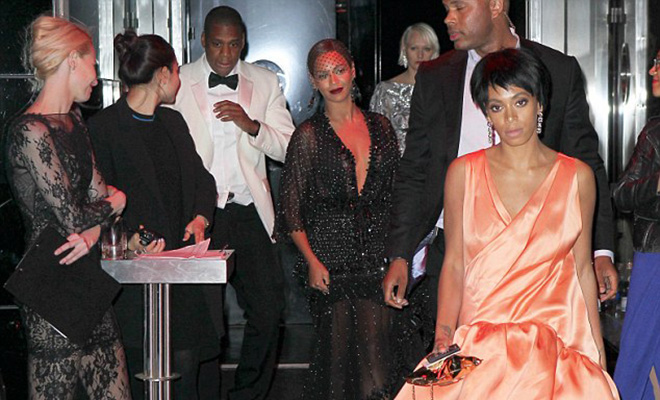 The person who single-handedly inspired the “#WhatJayZSaidToSolange” trending topic on Twitter and the hilarious memes that followed is now out of a job as of Wednesday (May 14).

According to a spokesperson for the Standard Hotel, officials have identified and subsequently fired the employee who sold the now-famous “Solange Jay Z Fight Video“ to Celebrity Big Brother aka TMZ.

The hotel said the person was terminated for “breaching the security policies of the hotel and recording the confidential CCTV video.”

The shocking 3-minute video, which was obviously supposed to remain “confidential,” was posted by TMZ on Monday — the week after it was recorded inside a Standard Hotel elevator.

The audio-less video shows Solange beating her brother-in-law Jay Z like he stole something as his superstar wife Beyoncé stands by seemingly without any significant involvement.

Hotel officials said after the video first leaked, they were “shocked and disappointed” by the breach of security, and said Wednesday they would turn over “all available information to criminal authorities.”

Reps for Jay Z, Beyoncé and Solange initially refused to comment on the video — which was sold to TMZ after a 5-day bidding war for $250,000, according to the New York Post — but they finally buckled to pressure from the public and released an official statement to the media Thursday night, a move that is out of character for the notoriously private family.

“Jay and Solange each assume their share of responsibility for what has occurred,” the Carter-Knowles’ statement read. “They both acknowledge their role in this private matter that has played out in the public. They both have apologized to each other and we have moved forward as a united family.”

“At the end of the day families have problems and we’re no different,” the statement continued. “We love each other and above all we are family. We’ve put this behind us and hope everyone else will do the same.”