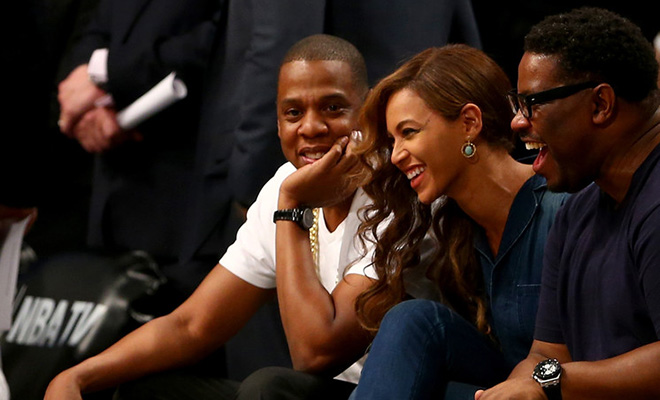 The Knowles-Carter family is in disarray at the moment, but you couldn’t tell by looking at Jay Z and Beyoncé‘s faces.

A shocking video leaked Monday (May 12) showing Beyoncé’s little sis Solange attacking Jay Z in an elevator at the Standard Hotel in New York City as the three of them were leaving an after-party for the Met Gala.

In the video, which was recorded via security camera the night of May 5th, Solange can be seen swinging, kicking and spitting at her brother-in-law, while Bey & Jay’s longtime bodyguard Julius attempts to hold her back in the stopped elevator.

Photos of the trio leaving the hotel show Solange looking mean, Jay Z rubbing his face and Beyoncé smiling as if nothing had happened just a few moments ago.

The couple looked fazed and unbothered as they watched the Brooklyn Nets take on (and eventually defeat) the Miami Heat in Game 4 of the ’14 NBA Playoffs at the Barclays Center.

Check out the pics here: