GOSSIPONTHIS.COM Celebs British Man’s Fear Of The Kardashians Causes Him To Break Out Into... 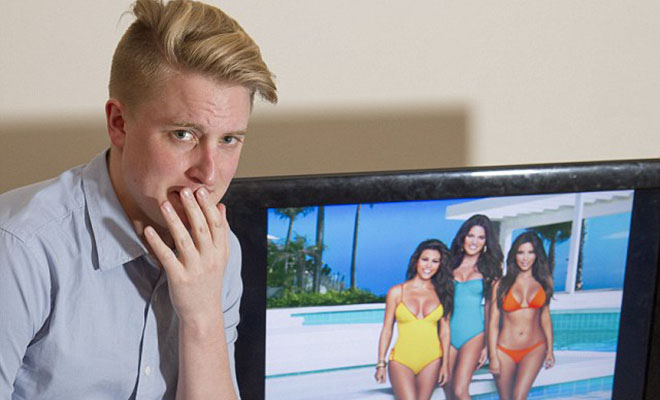 Most people who have phobias are usually afraid of spiders, clowns or even height. There are also people who are afraid of fruit. But apparently there is a Kim Kardashian phobia … and it is real!

24 year-old retail assistant Mike Amess, a UK resident, has a serious fear of Kim K and the rest of the Kardashian family.

Amess’ fear is so bad, anytime he sees or hears the Kardashian name, he breaks out into a cold sweat. He even throws up to the sight of Kim being semi-nude, which sounds like a joke, but sadly it isn’t. THIS GUY IS DEAD SERIOUS.

“Just hearing the sound of the Kardashians’ nasal voices or catching a glimpse of them on screen makes me feel nauseous and shaky. My hands get clammy, my breathing gets heavier and I start sweating. Sometimes, I get teary and want to retch.”

Mike, who is gay, claims his fear began when was a young teenager and watched Kim’s infamous sex tape with Ray J.

“I was raised Catholic and growing up, I tried to repress my sexuality and deny that I was gay. Loads of the boys at school were going on about how good Kim Kardashian’s sex tape was. I thought I’d give it a watch in the hope it would turn me on.

“I downloaded the video and watched it secretly in my bedroom. But the sight of Kim writhing around with her huge bum and the sound of her horrible high-pitched wailing repulsed me.

“I really wanted to be aroused by her so I kept watching it but she made me feel more and more upset. By the end of the tape, I had burst into tears. The experience left me terrified and I never wanted to see Kim’s face again.

“I have come to terms with my homosexuality now but my dread towards her has never left.”

Mike says he despises the entire Kardashian family and doesn’t find Kim or her sisters the least bit attractive. He also finds it hard to look up celebrity news on websites or in magazines without the Kardashians being all over it.

“Kim and her sisters look and sound so similar – they’re a mess. They make my stomach churn, I hate it.

“I dislike everything about them, especially their physical appearance. I don’t understand how anyone could find them attractive. I can’t stand their voices either. They’re so whiny and shrill – it really gets under my skin.

“It’s impossible to get away from Kim, let alone her whole family. Every website or magazine you read has them plastered all over. I really enjoy reading the news but if I see Kim on the cover of a newspaper or a big picture of her across a website, I won’t go near it.

“It makes life really difficult. Sometimes, I miss out on a lot of important news or celebrity gossip because I have to avoid anything which features the Kardashians.”

Mike even says that his strong dislike for the Kardashians has cost him several romantic relationships.

“A lot of the gay community love the Kardashians so it makes dating tough sometimes. I’ve been romantically involved with several people who like them and each one of these relationships have ended badly.

“My last boyfriend watched all of their shows and kept up with the celeb gossip surrounding them. He thought the Kardashians were fascinating. At first, he found my fear funny and kind of cute. But over time, he wanted to talk about the Kardashians with me and of course, that’s not something I was really up for doing.

“We had a big argument once when he demanded to watch the latest episode of ‘Keeping up with the Kardashians’ whilst I was with him. We had a blazing row in which he called my phobia immature and attention-seeking. I ended up storming out of his flat.

“In the end, it became difficult spending time with him and definitely played a role in our break-up.”

Mike is reluctant to see a doctor for his phobia, and despite having support from his friends, he claims to be constantly made fun of over his fear of the Kardashians.

“I don’t know how I could face a doctor about it. I can just see them laughing in my face the minute I told them about my fear of the Kardashians. It would be totally mortifying.

“I have to get my friends to go through a newspaper or magazine before I read it and rip out any pages which contain pictures of the Kardashians. Although my mates are supportive, they always make fun of my fear and play practical jokes on me.

“Once, my friend put a picture of Kim Kardashian on his bathroom door so I couldn’t go to the loo all night. It was unbearable! Another time, one of my mates got drunk at a party and chased after me with a photo of Kim’s ‘Belfie’ on his mobile phone.

“They find it hilarious but they don’t realize how traumatic it is for me. I wish I wasn’t scared of the Kardashians.“

Wow … this guy has some serious issues! Nothing in life can be this serious, especially if it’s over the Kardashians.

Grow a pair of gonads and stop acting like a little emotional little bitch! It’s almost ironic his name is Mike “Amess” … because this guy is a complete mess.