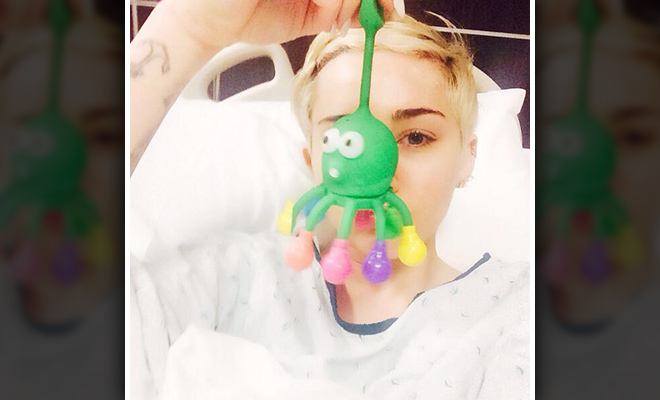 The last couple of weeks haven’t been all that great for Miley Cyrus.

Just weeks after mourning the death of her dog Floyd, Miley has been sicker than ever.

The “We Can’t Stop” singer was reportedly hospitalized for a severe allergic reaction to antibiotics and was forced to cancel a concert in Kansas City Tuesday night (Apr 15), according to a statement posted on the official website of KC’s Sprint Center, where the show was to be held.

Miley, who was upset about not being able to make the show, tweeted:

She also posted a pic of her laying in a hospital bed and tweeted about how miserable she was.

Mr. Octopussy & some amazing Drs are taking good care of me ???? pic.twitter.com/7FJFxYa7M5

Doctors have ordered Miley to stay in bed at least for another day or so causing her to have to cancel another show in St. Louis.

the hospital is sayin i wont b released today???? therefore Im not going 2 make it 2 St Louis. Im so sorry but somethings are outta my control.