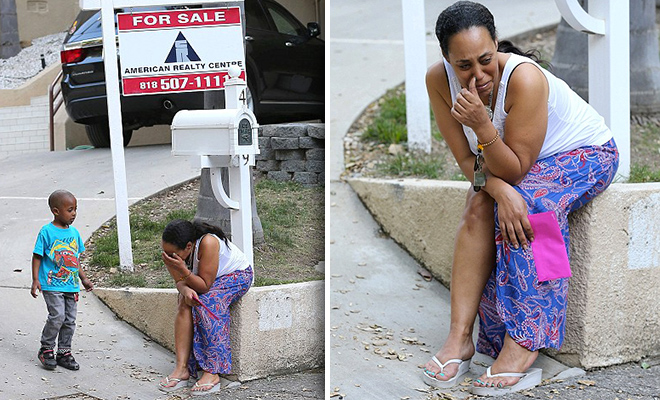 Alexsandra Wright, the mother of Beyoncé’s half-brother Nixon, has publicly announced that she is being forced out of their home because she is “struggling” financially … and no one in the Knowles family (including Yoncé’s daddy Mathew Knowles, who recently had his child support reduced) has reached out to help.

Alexsandra exclusively tells In Touch that she and their 4-year-old son, Nixon, are financially struggling — and no one in the Knowles family has offered to help find them a home. “Nixon deserves to know his family, and I hope one day he will meet his sister Beyoncé,” Alexsandra tells the mag.

On March 3, a judge ruled that because Mathew, 63, lost his gig as his superstar daughter’s manager in 2011, his child support payments should be retroactively reduced, from $12,000 to $2,400 per month.

The ruling means he won’t have to make another payment for almost two years. “I can’t imagine how Beyoncé feels knowing she has a homeless brother,” Alexsandra says. “I know if I were in the same position, I would reach out. Maybe she is too busy.”

Back in February of this year, Wright revealed in an interview with Inside Edition (this woman LOVES giving interviews, right?) that she had been “forced” to go on food stamps due to Mathew’s then-outstanding $32K child support debt.

At the time, Wright said she planned to pursue legal action with the hopes of receiving some public assistance from Mr. Knowles.

Beyoncé hasn’t responded to the situation yet, and likely won’t, but Wright’s recent comments to In Touch Weekly are a clear contrast from her Inside Edition interview when she said she didn’t expect the Pop superstar to take “accountability ” and raise her son, which was something she said Mathew once suggested, even though he himself has never even met his own child.

“I don’t expect Beyoncé to take accountability. It’s not her problem. It’s not her situation,” Wright said. “Beyoncé and Jay Z have never attacked me. They’ve [never]done anything wrong to me. They’ve never been negative at all.”

Alexsandra and Nixon were pictured looking emotional as they packed their belongings into boxes earlier this month.

Nixon could be seen comforting his mother as she cried while sitting at the edge of their driveway opening letters, before packing boxes in the garage. The two also looked at photos together on their balcony before they finished packing.

What do you think? Should Beyoncé help her lil bro out? Or do you feel like this is just NOT her responsibility, not even in the least bit?