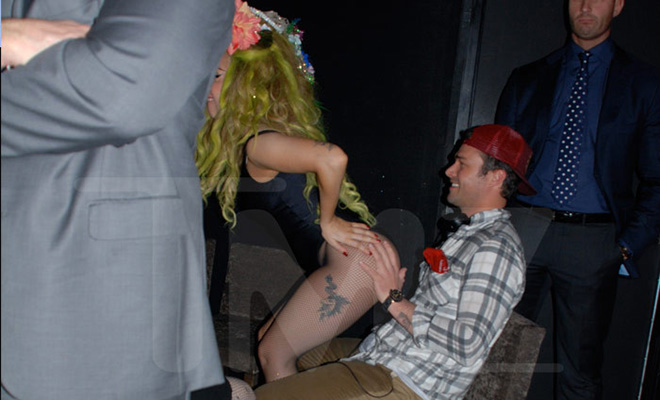 After performing at Roseland Ballroom, the “Do What You Want” singer headed to BPM night club, where she was spotted swapping spit with her boyfriend and giving him an X-rated lap dance. He met Gaga in a VIP area. “She then assumed a stripper persona and put on a show for him,” a spy said. “She was doing a serious lapdance and they started making out.” Things got so hot and heavy, Gaga’s guards pulled a curtain around the couple and 10 others in their area.

“She jumped on a banquette, pulled Taylor’s face into her crotch, was stroking his hair,” said an insider. She was singing, “do what you want .?.?. with my body,” to her recent duet with R. Kelly.

Inside the curtained area Kinney grabbed Gaga back, and she also spanked a female friend with a rose (as one does). “She did this whole act for 12 people,” our source said. Lady G and Taylor K have been dating for two years and they obviously have no problem showing their public affection for each other!