GOSSIPONTHIS.COM Celebs Vybz Kartel Sentenced to 35 Years to Life in Prison for Murder 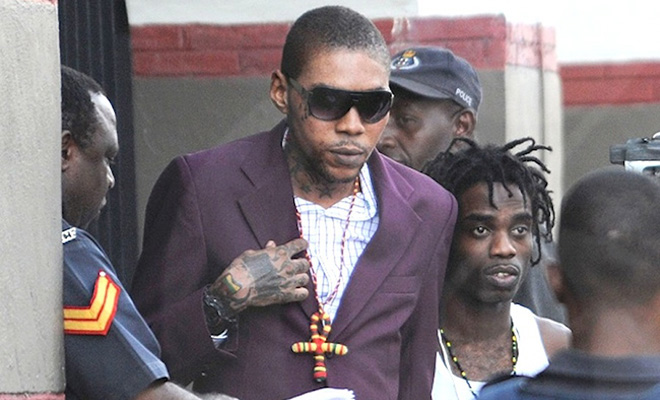 Jamaican dancehall artist Vybz Kartel was found guilty of murder last month after a trial that lasted over two months, and last Thursday (Apr 3) Kartel (born: Adidja Palmer) was sentenced to life in prison for the August 2011 murder of Clive “Lizard” Williams.

According to the Jamaican-Gleaner, Vybz Kartel and three other men were convicted for Lizard’s murder (Shawn “Shawn Storm” Campbell, Kahira Jones and Andre St. John) were each given life sentences. Vybz, particularly, will have to serve at least 35 years before he is eligible for parole.

Cops said Williams was killed over two missing guns that belonged to Vybz Kartel and his body has never been found.

In handing down his sentence, Justice Lennox Campbell said there was a great deal of planning and premeditation that went into Williams’ murder, and that the deceased suffered mental stress and threat.

Attorneys for the convicted men plan to appeal the sentences.

Last summer, Vybz Kartel was found not guilty in another murder case, that of St. Catherine businessman Barrington “Bossy” Burton, in which the controversial reggae artist was charged with conspiracy to murder, possession of a firearm and murder after a burned body was found inside a home that he was known to visit or own.

The jury in that case also found Kartel’s two co-accused (Lenburgh McDonald and Nigel Thompson) not guilty as well, and all three — including Vybz — were freed after the court was informed by the prosecution that it had no further evidence against the men.