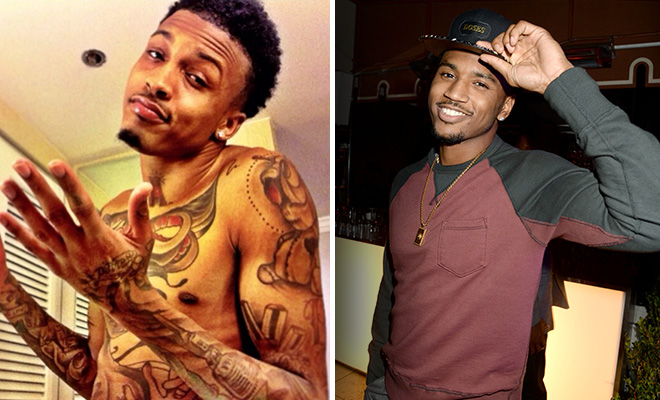 Does August Alsina have beef with fellow R&B singer Trey Songz? (Spoiler: Yes, he does!)

In a recent interview with our buddies over at Rap-Up TV, R&B newcomer Augusta Alsina revealed that he doesn’t “f*ck with Trey” anymore.

“I don’t really f*ck with Trey right now,” Alsina said.” We don’t get along right now. We ain’t on the same page. He did some other sh*t and we just don’t rock.”

But when asked about his relationship with Chris Brown, August had nothing but good things to say.

“Chris, that’s my n**ga. That’s love.” he said. “I spoke to him a while ago. He going through what he going through, his situation, and i just always try to uplift him with positivity and love.”

August went on to add further details about his situation with Trey.

“Like I tell people all the time, show me that you’re this person on day one… You should always be that person. We were supposed to have a show together and it just went left ’cause I can’t deal with ni**as’ egos and attitudes ’cause I’m just a real ni**a comin’ through and I’m rockin’.”

“Once ni**as go to talkin’ a certain type of way, that shit ain’t gon’ fly with me and that’s all that was and I just had to not do the show ’cause I can’t stand on side of a ni**a if I really got something that I feel in my heart. It just ain’t gon’ work, so I just had to dip and we didn’t do it, but it is what it is.”

We wonder what Trey has to say about this?