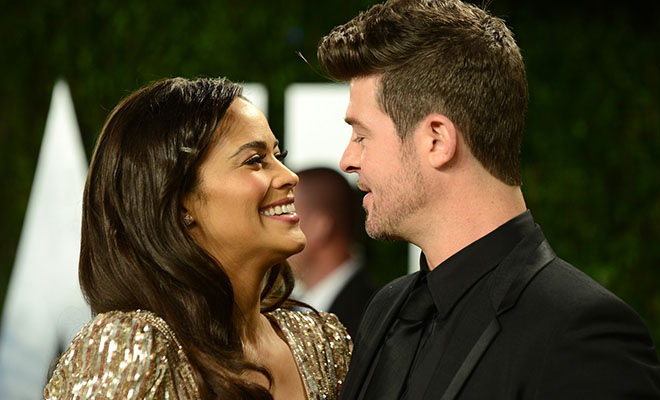 Robin Thicke can say goodbye to that fine piece of ass he wakes up to every morning!

Robin’s wife of 9 years, actress Paula Patton has decided to separate from the R&B singer.

The couple confirmed the news to People with the following statement:

“We will always love each other and be best friends, however, we have mutually decided to separate at this time.”

There’s no official details on why Robin and Paula are splitting up … but it’s obvious it has something to do with Robin being spotted out all over other women in the past few months.

Last August, Robin — who claimed in a previous interview that he has “the most function, dysfunctional marriage in Hollywood” — was caught playing grab-ass with a fan at an awards show after party, but perhaps it was that curly-haired French woman he was spotted snuggling up with at a nightclub in Paris that made Paula go, “You know what? I’m done” … and here we are.

The couple who were high school sweethearts met more than 20 years ago and have a son together.

It’s sad to see these two on the verge of a possible divorce … but hey, you never know what goes on behind closed doors.