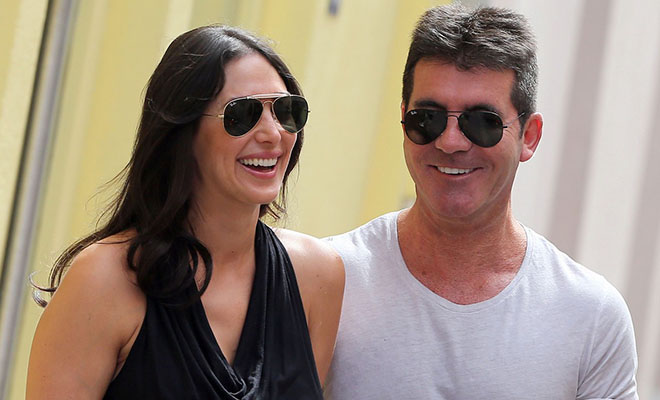 Simon Cowell is officially a father! (Wow, that sounds really weird when you say it out loud.)

The 54-year-old “X Factor” judge and his girlfriend Lauren Silverman (Remember? The woman who used to be married to Simon’s best friend, the real estate mogul Andrew Silverman? Yeah, her.) welcomed their first child together on Friday (Feb 14) at around 5:45 p.m. at a hospital in New York City.

The couple named their newborn son Eric, and he reportedly weighed in at around six pounds, seven ounces.

Cowell’s reps confirmed the news to People exclusively. “Lauren is doing great. Her parents are there, along with Simon of course,” a source said. “They are so excited. Everyone is thrilled. They couldn’t be happier. The baby is gorgeous.”

Cowell also confirmed the news himself on Twitter with a series of oddly staccatoed tweets:

Very happy to say Eric was born at 17.45pm. Healthy and handsome.

Lauren in great shape. Thanks for all of your kind messages.

Named after my dad

The July announcement that the couple was expecting a baby together came as a surprise, as Silverman, a New York socialite, was married to Cowell’s close friend, Andrew Silverman. In December, the two, who have an 8-year-old son together, finalized their divorce.

“It was kind of uncomfortable. You know, the situation. But these things happen and everything is kind of calm now and I’m happy,” the music mogul said during an appearance on The Ellen DeGeneres Show.

The realization that he was going to be a father came when Cowell first saw a scan of his baby on the way — which sources later told PEOPLE was a boy.

“You literally see this thing which is now alive moving around. I feel very paternal right now,” he said following the ultrasound.

And while Silverman was showered with baby gifts during a celebration to honor the upcoming addition, Cowell was busy putting together his own parenting plans.

“There are a lot of boring things that happen when you have a baby. [You have to get rid of] sharp edges, cigarettes, alcohol … then there’s [baby-proofing] the toilet. But I’ll have a smoking room!” he joked.

We’re glad Simon can laugh about the fact that he brought a love child into the world by a woman who was married to his ‘BEST FRIEND’ this time last year. IT’S SO FUNNY! HAHAHAHAHAAAA!!!!