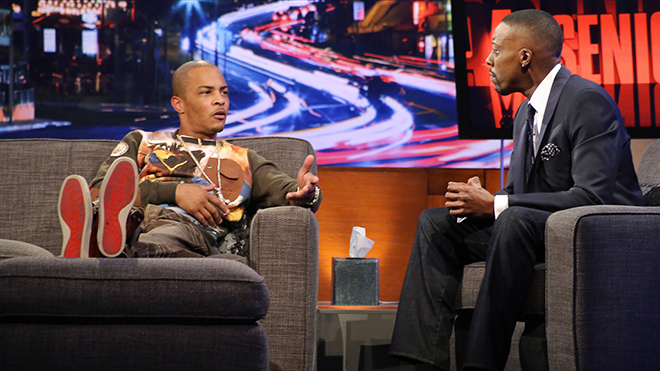 T.I. stopped by by “The Arsenio Hall Show” Wednesday night, put his feet up on the couch and spoke on a number of things, including working on an upcoming movie with Will Ferrell and Kevin Hart, helping squash the beef between Young Jeezy and Rick Ross, and being a mentor to Justin Bieber.

On working on a movie with Will Ferrell and Kevin Hart:

“Well, we was definitely there for the something, all in the same room for the same thing. It’s definitely not a record, probably too big for TV…. or not.”

On helping squash the Young Jeezy and Rick Ross beef:

On being a mentor to Justin Bieber:

“When I speak to him, he listens with an open ear and I just tell him ‘man everybody has that moment when they had to look at themselves in the mirror and say somethings got to change.’ You know? It’s not the environment all the time, sometimes it’s ‘me’ and he understands. I just told him, you have to pick and choose your times and moments when you can do what you want to do and do what you have to do.”