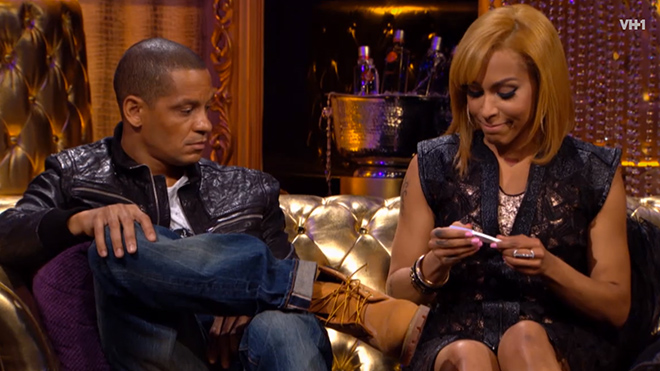 Amina dropped the bombshell literally within the first five to ten minutes of the show’s opening segment, because she felt like she had to get it off her chest. LITERALLY.

I mean, the girl pulled the positive pregnancy test out of her breast and everything (eww?) and threw it in Peter’s lap like, “yeah, nukka … I gotcho azz for real now.” (Sidenote: What is it with these “Love & Hip Hop” cast members walking around with USED pregnancy test sticks?!?)

“I need to say something that is very very important that I say this today. Anyone who watched the season knows I like to pull things out of my bra and slam them on the table.

“We don’t have a table right here but there is something that I would like to give to my husband … Unlike your baby’s mother, I did not take the Plan B.

“I’M PREGNANT … and ain’t nothing fake about that!”

Safaree Begs Erica Mena to Take Him Back After He’s Caught Cheating With His Ex-Girlfriend, Plus Erica Trashed the Roses He Sent Her