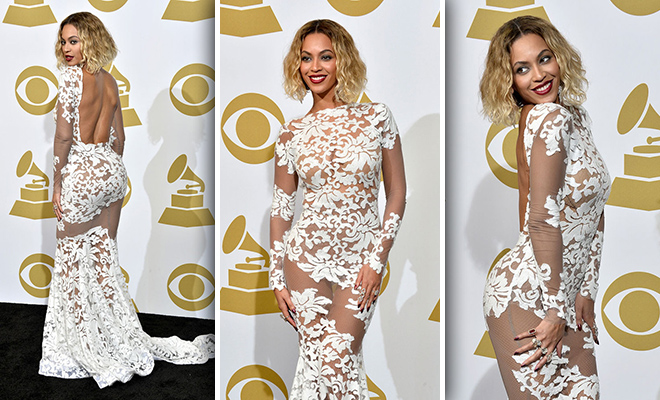 Beyoncé skipped out on walking the 2014 Grammys red carpet, seeing as, you know, she had to OPEN THE SHOW and all, but she did pose for a number of photos backstage in the press room!

After Beyoncé showed what it looks like to show your ass (but with CLASS) while performing her hit single “Drunk In Love” with hubby Jay Z, the 17-time Grammy winner exuded sexiness in a sheer white dress while showing off her outfit to photographers.

Yoncé was nominated for one award — Best Rap/Sung Collaboration for “Part II (On the Run)” with Jay Z — but they lost that, ironically to Jay Z and Justin Timberlake’s “Holy Grail.” So in a way, she still won (Because when Jay wins, Bey wins, and vice versa). But none of that even matters.

BEYONCÉ LOOKS HOT AS F**K IN THAT DRESS!!!! And that’s ALL that matters.