GOSSIPONTHIS.COM Celebs Grammys 2014: Pink Pulls Out the Same Old Tricks for “Try” and... 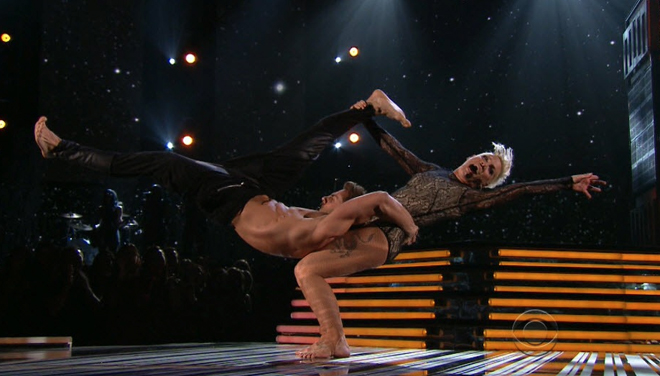 Pink has been known in pop music for her tough girl act. She’s the tom boy who can hang with the boys but kick it with the girls if she wants to. She straddles the line between masculine and feminine with an ease that few of her peers can.

So when she did that athletic, gymnastic “Cirque du Soleil”-style routine at the Grammys four years ago, most of us were surprised and amazed. Then she took the acrobat routine on the road and apparently she hasn’t given up the schtick since, even though she’s since put out a new album.

Given how many times we’ve seen Pink dangle and twirl from the ceilings, you might get a sense of deja vu when you watch Pink perform “Try” at the 2014 Grammys. She eventually makes her way to the stage but instead of drenching herself in water like she did last time, she play wrestles with a male dancer.

After her wrestling match is over, Pink puts on a ladylike skirt and duets with fun.’s Nate Ruess for their medieval-inspired duet, “Just Give Me a Reason.”

Pink apparently takes the “if it ain’t broke, don’t fix it” adage to heart. Hopefully y’all don’t mind the fact that she’s re-gifting this performance for y’all.