GOSSIPONTHIS.COM Celebs Grammys 2014: Lorde Will Never Be “Royals” If She Keeps Performing Like... 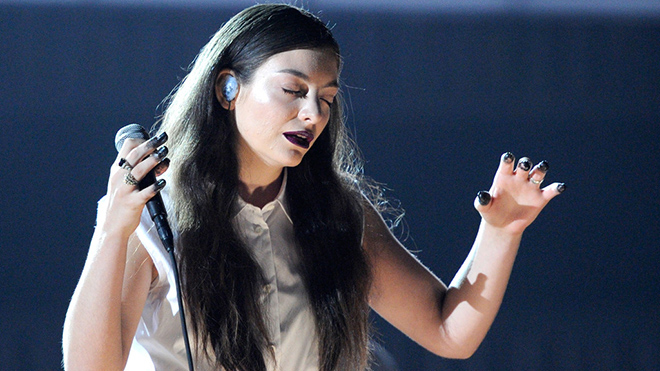 Shortly after Beyoncé and Jay Z opened up the 2014 Grammy Awards with their super sexy “Drunk In Love” performance, Lorde — the 17-year-old singer-songwriter from New Zealand your friends won’t stop telling you about — hit the Grammys stage tonight to perform a stripped-down rendition of her own hit single “Royals.”

Rocking a rather creepy style that made her look like Wednesday Adams, music’s newest “it” artist Lorde — up for 4 nominations tonight — appeared uncomfortable as she belted out the notes to the song that denounces materialism and anything that costs more than $100. Vocally, she did a pretty good job, I will say … but what was up with all of those twitchy/jerking movements she called herself doing? #UNNECESSARY. Just sing, girl. We don’t need all that extra stuff from you. We don’t even know you like that!

feeling so good about tonight. spot the grrl pic.twitter.com/hdByJWpVqx

Also, totally un-related (to the performance), but where is girl’s long-form birth certificate? She’s supposed to be 17, but the motherf**ker look 30.

WATCH LORDE PERFORM “ROYALS” AT THE 2014 GRAMMYS ABOVE