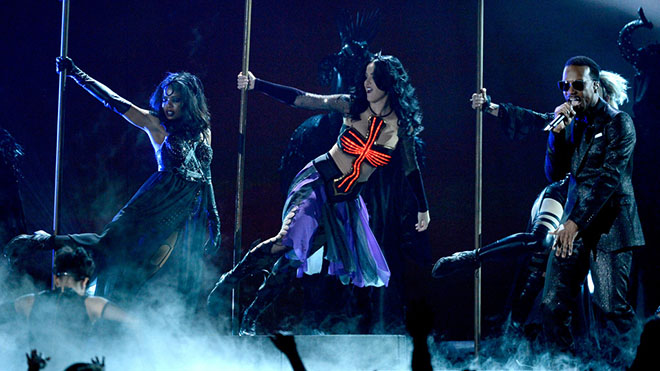 Katy Perry lit the stage on fire (LITERALLY!!!) tonight at the Staples Center in Los Angeles at the 2014 Grammy Awards with her bewitching performance of her new single “Dark Horse,” featuring Juicy J.

Clearly inspired by the popular FX horror show “American Horror Story: Coven,” Perry — dressed like a witch — started her spellbinding performance inside a crystal ball, but by the end, she was surrounded by a ring of fire, giving the illusion that she was being burned at the stake … LIKE A WITCH! If that’s not “AHS:Coven”-inspired, we don’t know what is!

Before the show, while chatting with Ryan Seacrest on the red carpet, Katy — who was nominated for Song of the Year and Best Pop Solo Performance for her hit single “Roar” — said her performance was inspired by a certain musical icon who just so happens to be a guest star on “AHS:Coven”

“I was hanging out with Stevie Nicks, that’s why I was late,” Perry told Ryan. “Actually my performance is kind of inspired by her. Let’s just say one of my favorite lines, ‘Which witch is which?’ It’s very spooky. It’s very dark.”

“Dark” doesn’t even begin to inspire this creepy azz performance. What do you think her uber-religious, preacher parents will have to say about this?!?